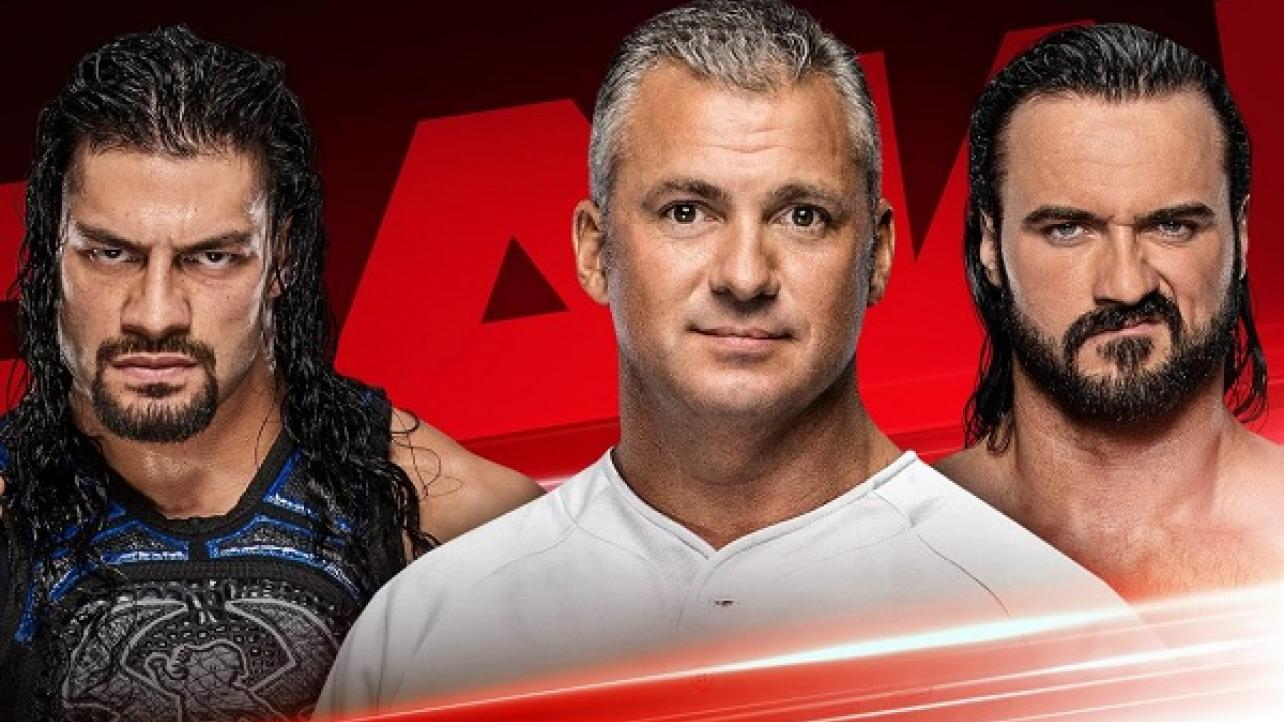 WWE returns to the Angel of the Winds Arena in Everett, Washington this evening for the post-WWE Stomping Grounds edition of WWE RAW on the USA Network.

In the wake of a very hard-fought victory against Drew McIntyre at WWE Stomping Grounds, The Big Dog must now defend his yard against both Shane McMahon & The Scottish Terminator. Plus, new United States Champion Ricochet is set to take on AJ Styles in a non-title showdown and so much more. Don’t miss RAW at 8/7 C on USA Network.

Despite putting up with nearly constant interference from Shane McMahon, the resilient Roman Reigns emerged triumphant over Drew McIntyre at WWE Stomping Grounds. There is no rest in WWE, however. For as the dust cleared, an irate Shane-O-Mac made it clear that he and The Scottish Psychopath will look to punish Reigns in a 2-on-1 Handicap Match tonight on RAW. Will Reigns defend his yard against such overwhelming odds?

Ricochet took full advantage of his first singles title opportunity by overcoming Samoa Joe to capture the esteemed United States Championship. Now that he’s titleholder, however, it is clear that he will have no shortage of challengers.

Case in point: Moments after AJ Styles, Luke Gallows & Karl Anderson invited themselves into the new titleholder’s photoshoot, The Phenomenal One said he would see Ricochet on RAW.

WWE.com has since learned that the two Superstars will, in fact, square off in a non-title match. Will Ricochet rise above? Will Styles end the celebration and set himself up with a future title opportunity?

Seth Rollins retained his Universal Title at WWE Stomping Grounds despite the underhanded efforts of Baron Corbin and Special Guest Referee Lacey Evans, who changed the rules throughout the matchup. Now that Rollins has toppled Corbin, will a new contender step up, or are Seth’s problems with The Lone Wolf just beginning?

Lacey Evans may have cost Rollins the Universal Title if it wasn’t for RAW Women’s Champion Becky Lynch, who stormed the ring and took out The Sassy Southern Belle. Becky beat The Lady in their RAW Women’s Championship Match, but it’s a safe bet that this heated rivalry will continue to burn tonight on RAW.

Make sure to join us here at eWrestling.com later this evening for live play-by-play results coverage of WWE RAW!