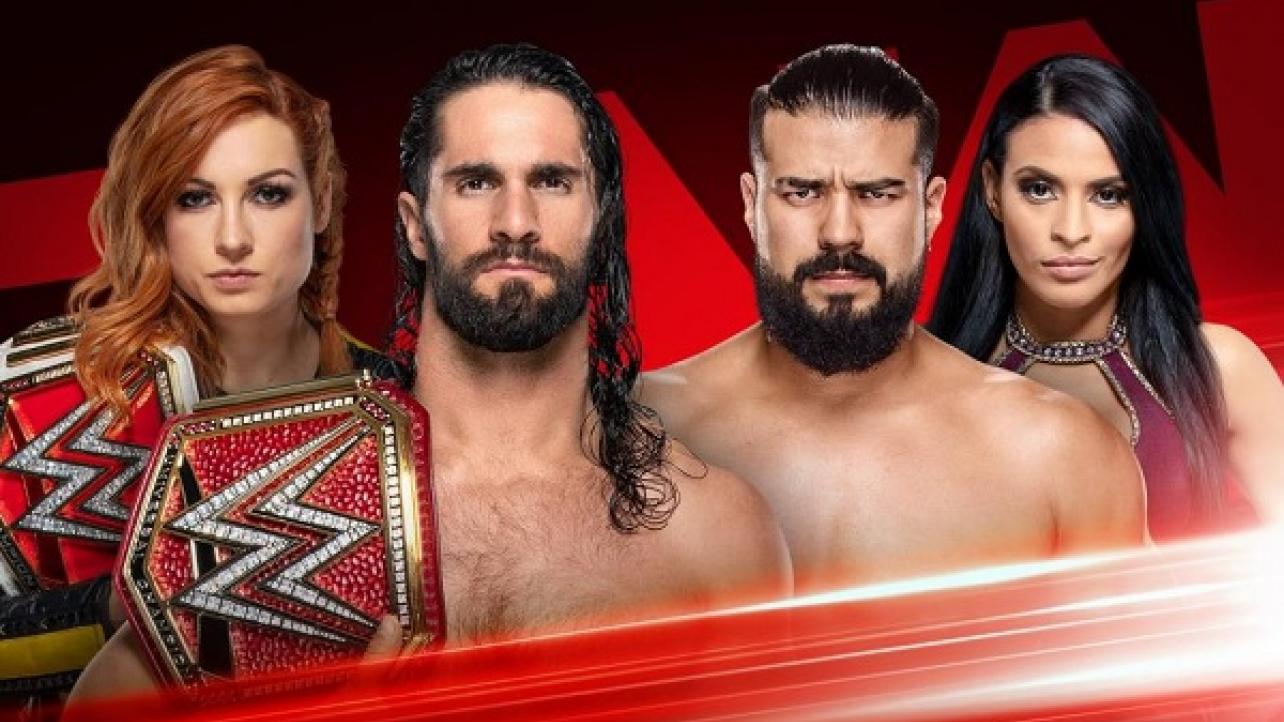 WWE returns to the Prudential Center in Newark, New Jersey this evening for their WWE Extreme Rules 2019 “go-home” episode of WWE RAW.

One week after Seth Rollins and Becky Lynch picked up a quick victory over Mike and Maria Kanellis on Raw – a bout that also included an astonishing surprise pregnancy announcement from Maria – the Universal Champion and Raw Women’s Champion will battle Andrade and Zelina Vega on the final Raw before their Winners Take All Extreme Rules Mixed Tag Team Match with Baron Corbin & Lacey Evans at WWE Extreme Rules, as first reported by Sports Illustrated.

Though The Beastslayer and The Man’s win over “The Power of Love” came relatively easily, the competitive couple will be hard-pressed to combat the conniving Wild Cards from SmackDown LIVE. Can Rollins and Lynch maintain momentum against Andrade and his calculating business associate as they prepare to put both of their titles on the line against The Lone Wolf and The Sassy Southern Belle?

Is The Club taking over the red brand?

After failing to capture the United States Championship from Ricochet in this past Monday night’s main event, a frustrated AJ Styles joined Luke Gallows and Karl Anderson in a sadistic post-match assault that culminated in a vicious second-rope Styles Clash to the titleholder. The three longtime running buddies followed up on the brutality with a symbolic “Too Sweet” gesture over the reeling Ricochet to signify to the WWE Universe that The Club is back, and they mean business.

What might the official reunion of this take-no-prisoners triad mean for the rest of the Raw locker room?

Despite what they might have said on Raw and SmackDown LIVE this week, Shane McMahon and Drew McIntyre – whether they want to admit it or not – showed fear in the presence of The Undertaker when The Deadman emerged this past Monday night.

This apprehension might be why The Scottish Psychopath and “The Best in the World” turned their tag team battle against The Undertaker and Roman Reigns into a No Holds Barred Match at WWE Extreme Rules next Sunday in Philadelphia. With that showdown looming, Reigns will have to team up with a partner of McMahon’s choosing against “The Best in the World” and McIntyre on Monday’s Raw, as first reported by Sports Illustrated. Plus, if The Undertaker interferes in the match, he’s out of this Sunday’s matchup.

Who will build momentum for their respective team just six days before Extreme Rules?

Following the unbelievable set of circumstances in which he was forced to relinquish the United States Championship due to a shoulder injury, Rey Mysterio will return to Raw this Monday night.

What will The Greatest Mask of All Time have to say upon his return and how will he impact the ever-changing landscape of the red brand?

R-Truth wants his “baby” back!

Drake Maverick spiced up his honeymoon with new wife Renee Michelle Monday night on Raw when he pinned R-Truth to become a two-time 24/7 Champion. As much as the title has seemingly destroyed Truth’s life, he seemed visibly distraught to be without it on SmackDown LIVE.

When will Truth strike back and become a nine-time 24/7 Champion? And how is Drake’s new bride coping with the possibility of walking into a surprise title defense at any time?

Will “Jealous” Joe get payback against the WWE Champion?

On SmackDown LIVE, Samoa Joe confronted Kofi Kingston and questioned the WWE Champion’s sincerity, and when Kofi countered that The Samoan Submission Machine’s bitterness was due to jealousy, Joe offered an apparent olive branch: If Kofi were to shake his hand, Joe would cease attacks on the WWE Champion and his loved ones in the lead-up to their WWE Extreme Rules title match. Unexpectedly, Kingston responded with a one-finger salute that would make “Stone Cold” Steve Austin proud before dropping Joe with Trouble in Paradise.

Now that Kingston has rejected that proposed ceasefire (which, knowing Joe, was nothing of the sort), how will The Samoan Submission Machine respond?

After driving Bobby Lashley through the LED wall during their Falls Count Anywhere Match on Raw, Braun Strowman suffered several injuries, including a potentially ruptured spleen. Since the incident, there has been much conjecture about the condition of The Monster Among Men and the severity of his injuries with little confirmation as to the true extent of the damage he sustained.

The All Mighty, however, was released from immediate care late Monday night with relatively minor injuries, taking to social media to say that “Braun got what he deserved” and that the next time he sees Strowman, he would “send him to the morgue.” But given Strowman’s alleged condition, the next time anyone sees The Monster Among Men remains uncertain.