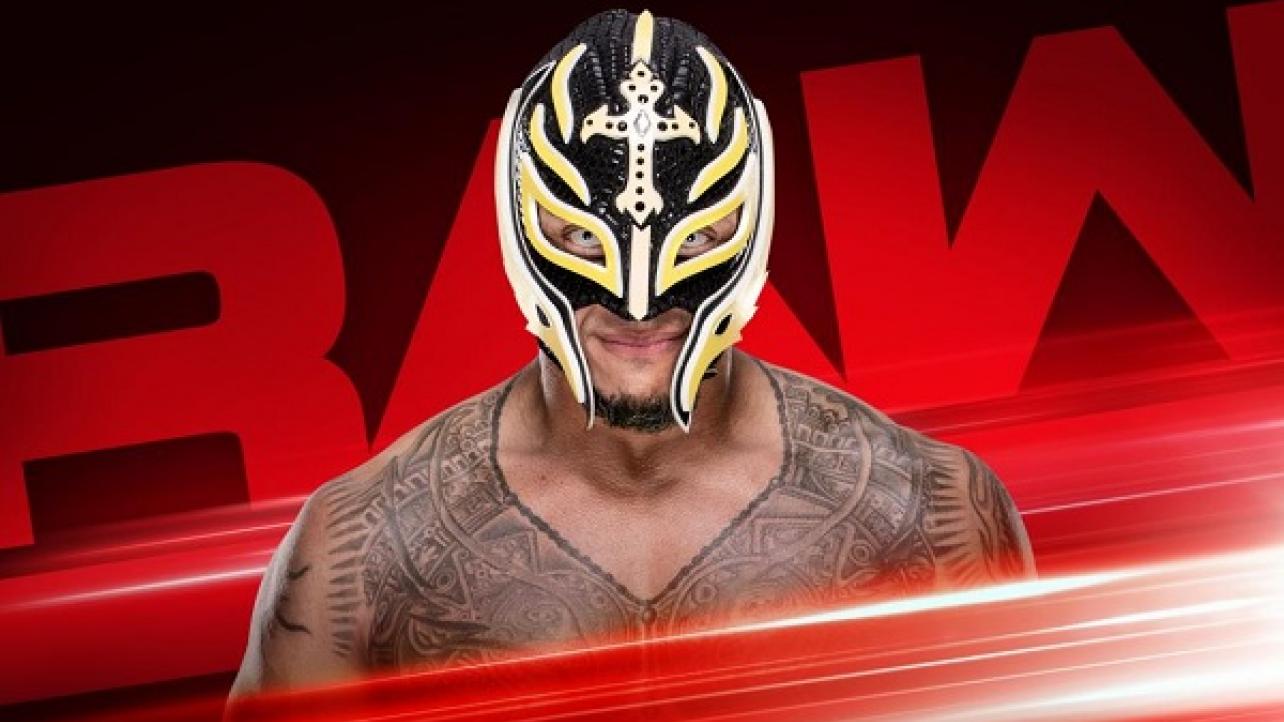 WWE returns to the Royal Farms Arena in Baltimore, Maryland tonight for this week’s episode of RAW on the USA Network.

The 2019 King of the Ring tournament rolls on with two must-see quarterfinal matches on this week’s Raw. Plus, Rey Mysterio returns to action after choosing to postpone his retirement. Also, Seth Rollins & Braun Strowman continue their strange saga, and Sasha Banks looks to continue her warpath on an all-new Raw, live at 8/7 C on USA Network.

Can Ricochet repeat history in King of the Ring quarterfinals?

The first genuine shocker of the King of the Ring tournament came last Monday when Ricochet ousted Drew McIntyre in the Round of 16 to place himself on a collision course with Samoa Joe in the quarterfinals. On paper, Joe has the momentum — he’s coming off a brawling, first-round win over Cesaro — and the strength advantage, but Ricochet has something else on his side: The high-flyer defeated Joe at WWE Stomping Grounds to win the United States Championship not too long ago. With Ricochet looking to repeat history and Joe looking to rewrite it, this one will simply come down to which Superstar wants it more. So who’s it gonna be?

Cedric faces down Corbin … but there’s a problem

Perennial underdog Cedric Alexander has been making a name for himself over the last few weeks, earning victories against Drew McIntyre and Cesaro as well as a quick defeat of Sami Zayn that sent the former WWE Cruiserweight Champion to the second round of the King of the Ring tournament.

A quarterfinal bout against the returning — and surging — Baron Corbin should give Alexander ample opportunity to cement himself as a star, but one question mark lingers over the match: a leg that took an absolute pounding during Cedric’s victory over Cesaro last week and is sure to be a big target for the man who is already calling himself King Corbin. Alexander shouldn’t be counted out, but facing a healthy, motivated Corbin does hand him a pre-match disadvantage, and he’ll need all of his heart to overcome it.

Upon her return a few weeks ago, Sasha Banks made it clear that she wants people to be talking about her, and for reasons other than whatever hypothetical tears she shed in a New Jersey locker room.

The Boss is out for the bag, having mangled Natalya in the ring last week while sending the very clear implication that her true target is Raw Women’s Champion Becky Lynch. The Man has remained uncharacteristically distant so far, lobbing insults from afar while taking credit for Sasha’s renewed relevance: A challenger is only as good as her champion, after all.

She may have a point there, but Lynch should know better than anyone that getting the attention of the crowd is the first step to domination. Sasha will come knocking on her door, and Becky must be ready to go if she wants to control the narrative the way she has all year.

Two weeks after his son Dominick pulled him from the brink of retirement, Rey Mysterio will return to Raw on Monday night.

A crushing 2-out-of-3 Falls Match loss to Andrade nearly caused The Ultimate Underdog to hang up his mask for good, but an inspirational appeal from his son – who wants to team up with his father in WWE someday – led Mysterio to change his mind. Although many in the WWE Universe support the masked icon’s decision to continuing competing in WWE, his critics question whether this choice was a wise one.

Regardless, Mysterio is ready for the next challenge when he returns to Monday Night Raw.

WWE Clash of Champions is going to be an interesting night for Seth Rollins & Braun Strowman, who will defend their Raw Tag Team Titles against Dolph Ziggler & Robert Roode before battling each other over The Beastslayer’s Universal Championship.

That puts the pair in the extremely complicated position of having to combat a team nobody knows much about, while also having to feel each other out in advance of a fight for Raw’s ultimate prize. For each man to get what he wants will take a true display of four-dimensional chess. Time will tell whose mind is up to the task.

Tune in to Raw, live at 8/7 C this Monday on USA Network!