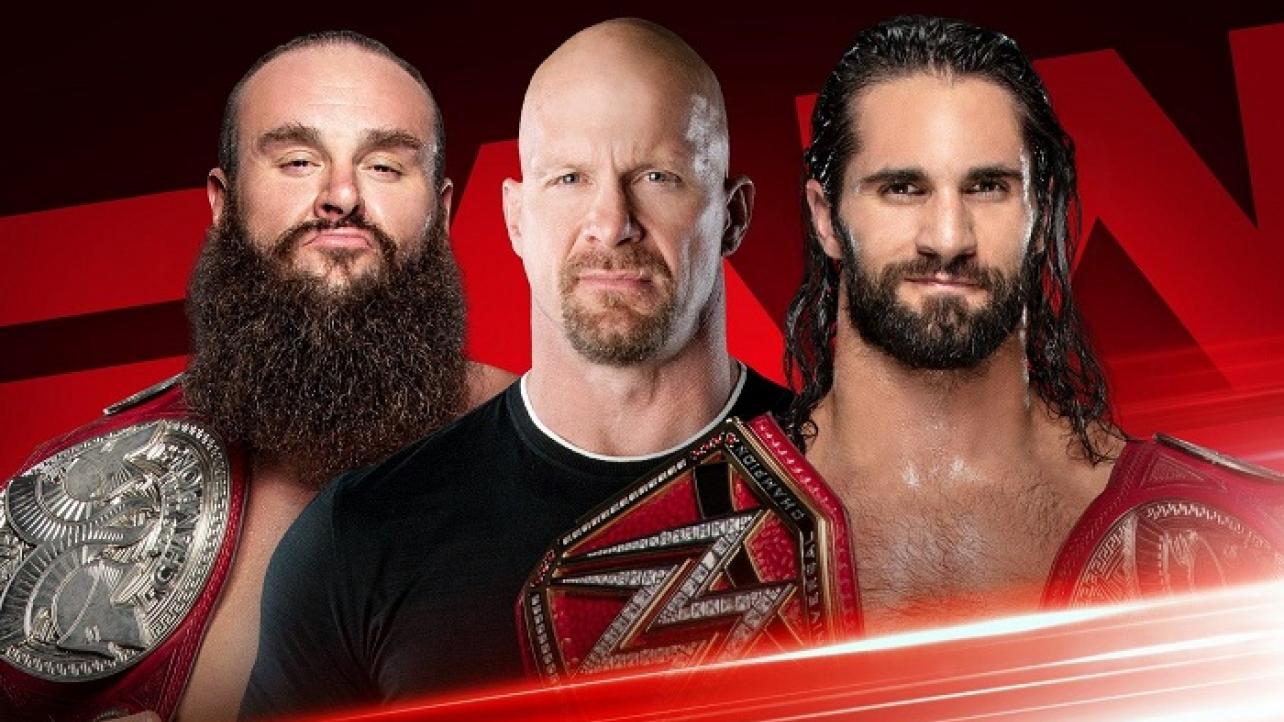 Six nights before WWE Clash of Champions, WWE Hall of Famer “Stone Cold” Steve Austin will preside over a contract signing for the Universal Title Match between Raw Tag Team Champions Seth Rollins and Braun Strowman. Can The Texas Rattlesnake control the chaos as the red brand returns to Madison Square Garden for the first time in a decade? Also on Raw, King of the Ring tournament semifinal action begins as Ricochet, Samoa Joe and Baron Corbin collide in a Triple Threat Match, Rey Mysterio returns to in-ring competition and much more!

One week after the Universal Title contract signing between Raw Tag Team Champions Seth Rollins and Braun Strowman for WWE Clash of Champions ended in chaos thanks to The O.C., WWE Hall of Famer “Stone Cold” Steve Austin returns to his old stomping grounds, Madison Square Garden, to preside over this anticipated contract signing … and raise some hell if he needs to.

After United States Champion AJ Styles, Luke Gallows and Karl Anderson spoiled Rollins and Strowman’s contract signing, Austin took to Twitter, announcing that he would be making sure the contract signing goes down like it’s supposed to next week, and that’s the bottom line.

I got an idea. Next week on #Raw, let’s complete this Championship Contract Signing, only this time it’ll be moderated by good ol’ #StoneCold @steveaustinBSR. And that’s the bottom line cause I said so. #WWEMSG

Remembering that Rollins received Austin’s seal of approval on Raw last month, Strowman seems wary of the WWE Hall of Famer’s return, stating plainly that if Austin steps out of line with The Monster Among Men, he’ll get those hands. However, just about anyone who has crossed The Texas Rattlesnake over the past 20-plus years has gotten a Stunner for their trouble, no matter their size.

Anything can happen in WWE, and if you’re Baron Corbin, the surprises aren’t always pleasant.

After Ricochet and Samoa Joe’s King of the Ring quarterfinal bout ended in a rarely seen double pinfall, WWE officials determined that both Superstars would advance to the semifinal round on Raw’s side of the bracket. As such, Corbin – who defeated an injured Cedric Alexander in his own quarterfinal match – will meet WWE’s resident superhero and The Samoan Shark in a Triple Threat Match Monday night on Raw. The winner of that semifinal match will go on to face a Superstar from SmackDown LIVE in the final match of the 2019 King of the Ring tournament.

Which of these three intensely competitive Superstars will advance?

The battle of WWE’s Four Horsewomen

After SmackDown Women’s Champion Bayley helped Sasha Banks obliterate Raw Women’s Champion Becky Lynch and Charlotte Flair in separate attacks on Raw and SmackDown LIVE this past week, The Man and The Queen will form an unexpected alliance against the brutal best friends in an anticipated tag team match involving all of WWE’s Four Horsewomen.

With Lynch poised to defend her title against The Boss and Flair challenging Bayley for her championship next Sunday at WWE Clash of Champions, who will gain key momentum?

Three weeks after his son Dominick pulled him from the brink of retirement, Rey Mysterio will compete on Monday Night Raw, taking on fellow luchador Gran Metalik of Lucha House Party in one-on-one combat.

With Dominick no doubt watching closely, how will The Ultimate Underdog fare against the high-flying Metalik as the masked warriors square off in legendary Madison Square Garden?

A backstage attack by The O.C. hindered Cedric Alexander’s chances of advancing in the King of the Ring tournament on Raw, and now this astoundingly athletic Superstar will have a chance at retribution against United States Champion AJ Styles when he battles The Phenomenal One this Monday night.

With his King of the Ring dreams tarnished by Styles and his nefarious allies Luke Gallows and Karl Anderson, Alexander will no doubt hold nothing back against the U.S. Champion. Will Alexander settle the score?

Make sure to join us here at eWrestling.com tonight for LIVE WWE RAW results coverage from MSG!