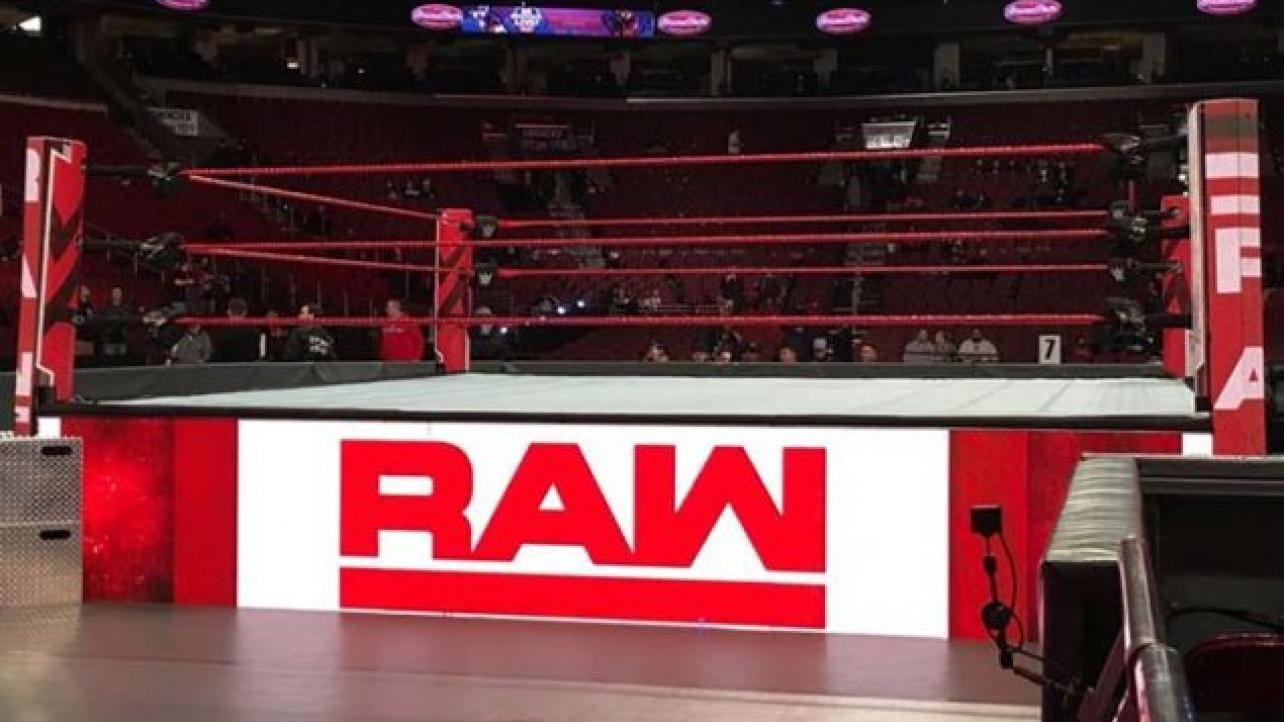 The September 24th, 2018 edition of WWE RAW takes place at the Pepsi Center in Denver, CO. Keep refreshing this page for live results starting at 8 PM ET and comment with your thoughts!

– Fans have now been seated and this week’s RAW will be kicking off shortly!

– It appears that WWE has a new “Then, now, forever” intro video they play before the broadcast.

– A black limo pulls up to the arena, and Stephanie McMahon gets out. Baron Corbin greets her and starts singing Happy Birthday, but then Triple H gets out behind her. Corbin tries to suck up to Stephanie, but Stephanie says she has something to say to Corbin right here and now. Triple H says this will be awkward, so he leaves, and wishes Corbin good luck. Stephanie chews into Corbin for poorly handling The Shield. She trashes him for putting himself in a Universal Title match, and tells Corbin he will have to find two partners tonight to take on The Shield. She adds that if Corbin doesn’t pick up his job performance, Kurt Angle might be coming back sooner than expected.

– The Shield comes out through the crowd and steps in to the ring, and they’ve got microphones. They take turns trashing Baron Corbin, Braun Strowman, Ziggler and McIntyre. Rollins mentions hearing that Stephanie told Corbin to find partners for tonight. Rollins says they’re ready right now to show Corbin how big of a problem The Shield is. Corbin comes out to the stage to respond, and he says tonight he’s going to impress his boss, and show everyone who The Shield really are – a bunch of selfish individuals. Corbin says no one in the locker room likes anyone in The Shield, including Strowman, Ziggler, and McIntyre, who he then introduces. They come out to the stage and Braun gets on the mic. He tells Reigns he won’t be carrying that Universal Title much longer, and he can already see The Shield falling apart. Strowman and Ziggler start talking to Ambrose, saying he doesn’t need The Shield, but The Shield needs him. Ziggler talks about Ambrose winning the WWE Title all by himself, and The Shield is holding him back. McIntyre says Dean pushed him to his limit last week, and he says Dean deserves more than to be a third wheel in the Shield. They try to play some mind games with Ambrose and say that he’s not getting anything in return for being in The Shield. Reigns interrupts and tells them to shut up, because people didn’t pay to see them talk, they paid to see The Shield kick their butts, so let’s do it. Braun, Dolph and Drew start to head down the ramp, but Baron Corbin gets in front of them and yells to stop. Corbin says this match isn’t happening right now. Corbin tells Drew and Dolph they have to defend their Tag Titles tonight so they can’t fight now. Corbin says him and his mystery partners will deal with The Shield later.

– Still to come: Drew McIntyre & Dolph Ziggler vs. The Revival

– Finn Balor is shown backstage warming up. Bayley walks up and gives him a hug.

– Up next: Finn Balor vs. Jinder Mahal, with Bayley and Alicia Fox at ringside.

– Finn Balor vs. Jinder Mahal: Bayley, Alicia Fox, and Sunil Singh are at ringside for this one. Jinder starts off strong and lays into Balor with knees, then hits a reverse suplex. Back in the ring, Balor continues the offense and hits a double foot stomp on Jinder. Balor misses a shot in the corner and Jinder fires back with kicks. Jinder runs the ropes but Bayley appears to trip up Jinder. Alicia runs around the ring to get in Bayley’s face, and they brawl on the floor. Sunil runs over and Bayley suplexes him. The distraction leads to Balor rolling up Jinder from behind for the three count.

– After the match, Jinder appears to blame Sunil for the loss. Jinder beats down Sunil at ringside and takes out his anger on him. He takes Sunil into the ring and beats him down with Alicia egging him off. Jinder then sits down and meditates with Alicia.

– The Riott Squad vs. The Bella Twins & Natalya: Nikki starts off strong against Liv Morgan, and she hits a back breaker for a two count. Brie comes in and hits the Yes Kicks on Liv next. Ruby tags in now and takes control against Nikki. The aprons clear into the ring and this leads to a big three-women suplex from the babyfaces to the Riott Squad members. The Riott Squad goes outside for a breather, and then back in the ring Sarah starts taking control. Natalya turns things around against Logan and locks in the Sharpshooter, but Ruby breaks it up. Ruby tags in now and hits the Riott Kick for the three count.

– The Bella Twins help Natalya back to her feet in the ring while the Riott Squad celebrates at ringside.

– Dolph Ziggler approaches Dean Ambrose backstage, and Ambrose grabs him by the collar. Ziggler says he’s not here to fight, and he once again tries to appeal to Ambrose. Graves thinks Zigglers’ words resonated with Graves a litle bit.

– We see a pre-taped promo from Chad Gable and Bobby Roode, where Gable asks WWBRD – What Would Bobby Roode Do?

– Chad Gable vs. Konnor: Bobby Roode and Viktor are both at ringside for this one. The opening bell sounds and Konnor immediately takes the fight to Gable. He slams Gable in to the corner and then applies a chin lock. Gable fights up but Konnor takes him into the corner and hits some elbows. Gable comes back with an arm bar, and then he hits some knee strikes on Konnor. Gable follows up with a German suplex for a two count. They run the ropes and Konnor hits a shoulder block and then a version of The Dominator for the three count.

– The Ascension celebrates after the match as Roode counsels Gable.

– We see a video package promoting the Mixed Match Challenge.

– Dolph Ziggler & Drew McIntyre (c) vs. The Revival: The Revival trades tags early on and they take turns beating on Ziggler. Dash stomps on Ziggler and starts working on his right hsoulder. Dash hits a Northern Lights Suplex for a two count. The fight spills out to ringside, where Ziggler dodges a shot and throws Dash in to the ring steps. Back in the ring, McIntyre tags in and suplexes Dawson down for a two count. Ziggler and Dawson tag in and go back and forth with chops and punches. Dawson hits a butterfly suplex for a two count. Dawson hits a superplex off the top, and Wilder tags in and hits a splash, but McIntyre breaks up the pin. The fight spills outside, where Wilder hits a tornado DDT on McIntyre off the fan barricade. Ambrose is shown backstage watching on a monitor. Back in the ring, Ziggler and Wilder go at it now. Ziggler looks for a Fameasser, but Wilder catches him and picks him up. Dawson comes flying off the top with a Doomsday Device type maneuver on Ziggler for a two count. McIntyre finally gets the tag and he cleans house. McIntyre picks up Wilder, but Dawson dropkicks them down. Drew comes back with a headbutt on Wilder and a big boot on Dawson. Ziggler tags in and they hit the double team Zig Zag/Claymore Kick for the three count.

– Elias is in the ring with his guitar for a song, but he quickly gets interrupted by Kevin Owens’ entrance. The lights come on and we see the Kevin Owens Show set behind Elias. Owens will be at ringside for Elias’ match. Owens gets on the mic and talks about beating John Cena on his first night in WWE. Lio Rush comes out to interrupt and he talks about Bobby Lashley coming out. He introduces Colorado’s own, Bobby Lashley.

– Bobby Lashley vs. Elias: Elias starts off strong, but Lashley comes back with a shot in the corner. Lashley mounts Elias and pummels him with 10 punches. Elias tries to mount a comeback, but Lashley catches him. Lashley looks for a fallway slam, but Elias fights out and takes out Lashley’s knee. Elias starts working over Lashley’s knee now. The fight spills out to the ringside where Elias continues to work over Lashley’s leg. Back in the ring, Lashley finally gets in some offense and hits a vertical suplex. Kevin OWens and Lio Rush get in to it at ringside now, which leads to Owens accidentally hitting Lashley. The ref calls for the bell.

– Lashley and Elias brawl at ringside while Owens and Lio run in the ring. Owens looks for a powerbomb on Lio, but Lashley makes the save.

– Seth Rollins approaches Drew McIntyre in the back and tries playing some mind games with him. Rollins tells Drew to give a good long think about his allegiances. Ziggler walks in and asks Drew if he’s ready, and Drew walks off.

– Nia Jax vs. Alicia Fox: Ember Moon and Alexa James are all at ringside for this one. Alicia starts off strong and stuns Nia with a big boot to the face. Fox follows up with a a running knee to the face for a two count. Nia catches her off the ropes and hits the Samoan Drop out of nowhere for the three count.

– Drew McIntyre approaches Dean Ambrose backstage. Drew tells Ambrose about Seth saying the same kind of things to him that they said to Ambrose earlier in the night. Drew says maybe Seth wants a 4-man Shield with Drew in it, or maybe Seth has other ideas. Drew brings up Seth screwing over Ambrose in the past, then he walks off.

– We see some promotional videos for the Super Show Down in Australia.

– The Shield vs. Baron Corbin & The Authors of Pain: Ambrose and Corbin start this one off. Corbin starts off strong, but Ambrose catches him with a drop toe hold and then tags in Rollins. Rollins and Ambrose hits a double vertical suplex for a two count. Rezar tags in and cleans house, and then Reigns tags in. Reigns and Rezar battle strength and right hands. Reigns finally fires up with a leaping clothesline. The aprons clear and all Hell breaks loose in the ring. The dust settles and Corbin is the legal man, and he hits a chokeslam backbreaker on Reigns.

Keep refreshing this page for live results starting at 8 PM ET and comment with your thoughts!