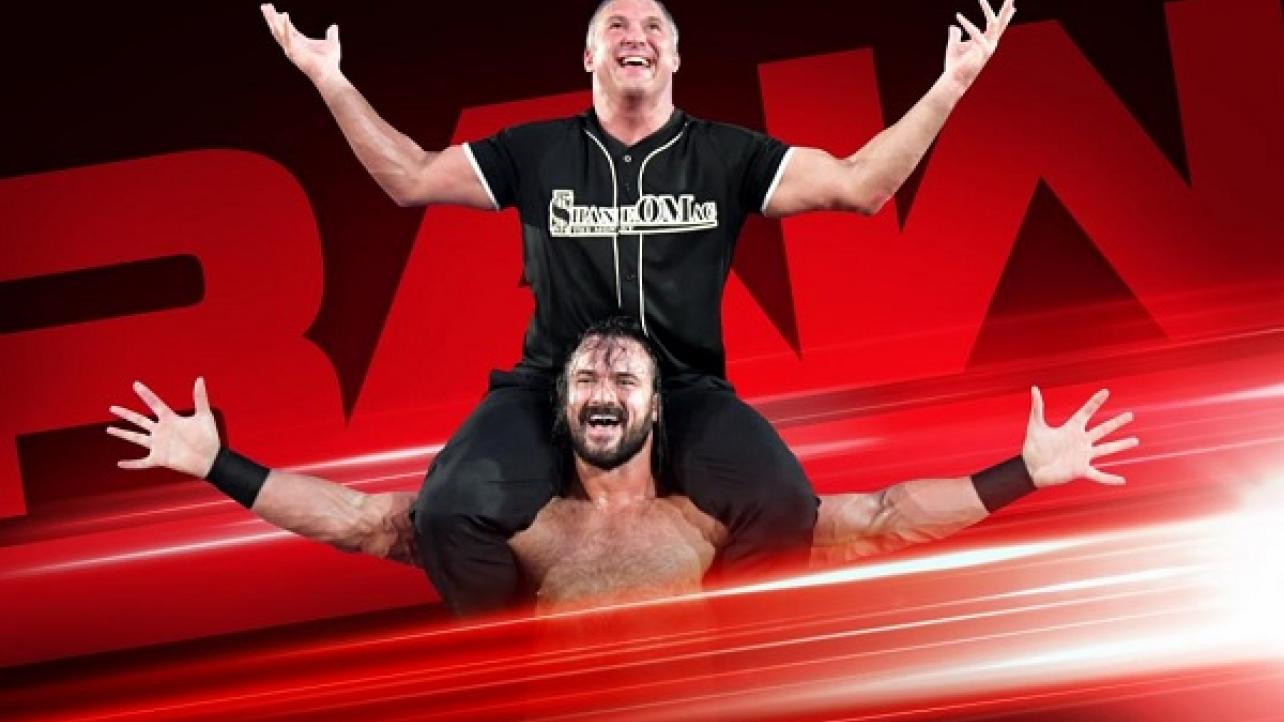 WWE.com has posted the following updated preview for tonight’s episode of WWE RAW:

Shane McMahon and Drew McIntyre have a reason to celebrate.

“The Best in the World” scored a tainted victory over Roman Reigns at WWE Super ShowDown after an interfering McIntyre blasted Reigns with a Claymore Kick behind the official’s back. And now the duo is headed to Raw to commemorate their taming of The Big Dog with a victory party.

How will Shane-O-Mac revel in his win over Reigns? Find out Monday night.

Samoa Joe regained the United States Championship last Monday after an injured Rey Mysterio relinquished the title to him. Now, the champion will join The Miz on Miz TV this Monday night.

The A-Lister has never seen a button he won’t push, so expect him to grill Samoa Joe on the unusual series of events that put the United States Championship back in his hands. What will the outspoken champion have to say about those controversies, along with his ugly dismantling of Mysterio last Monday? Find out when the always-memorable talk show comes at you on Raw.

Zack Ryder & Curt Hawkins look to continue their storybook run as Raw Tag Team Champions as they take on The Revival in a WrestleMania rematch with the titles on the line this Monday night.

Will Ryder & Hawkins prove to have the numbers of Dash Wilder & Scott Dawson yet again? Or, will The Top Guys avenge their WrestleMania 35 demons en route to regaining the Raw Tag Team Titles? Tune-in Monday night at 8/7 C to find out.

WWE had previously posted the following preview for the show over the weekend:

Seth Rollins retained his Universal Championship against Baron Corbin at WWE Super ShowDown, but a post-match End of Days from The Lone Wolf left The Beastslayer vulnerable to Brock Lesnar’s promised Money in the Bank cash-in … or so the WWE Universe thought. When Lesnar’s advocate Paul Heyman tripped on the way into the ring, The Beast was momentarily distracted, giving Rollins the opening he needed to stagger The Conqueror with an uppercut below the belt. Rollins then unleashed on Lesnar with steel chair strikes, punctuating the punishment with a Stomp to The Beast onto the Money in the Bank briefcase.

Lesnar is deterred, at least momentarily, but he never officially cashed in his Money in the Bank contract, meaning that he still has nearly a year to cash in for a World Championship opportunity at the time and place of his choosing. As The Beast licks his wounds and bides his time, Rollins looks ahead to a Universal Championship rematch against Corbin at WWE Stomping Grounds.

This past Monday night, Raw Women’s Champion Becky Lynch wasn’t about to let two of her most despised rivals go one-on-one without getting into the mix. After striking Charlotte Flair at ringside, The Man stormed the ring and nailed Lacey Evans with the Man-handle Slam before standing over The Sassy Southern Belle with her title held high.

On Sunday, June 23, Lynch and Evans will collide for the Raw Women’s Championship at WWE Stomping Grounds. Will The Man and The Lady of WWE collide again on Raw, two weeks before their title collision?

With no less than three Powerslams Friday at WWE Super ShowDown, Braun Strowman defeated Bobby Lashley and proved he’s the most dominant behemoth on Monday Night Raw. Now that he’s cut The All Mighty down to size, how will The Monster Among Men keep his mammoth momentum going?

Truth on the run

Whether on the golf course, under the ring, on a tarmac or even 39,000 feet in the air, R-Truth has a target on his back as long as he continues to hold, defend and reclaim the 24/7 Championship. As Drake Maverick, Jinder Mahal and a horde of ravenous Superstars remain hot on his heels, can Truth keep his wits about him?

Don’t miss any of the action this Monday night on Raw, live at 8/7 C on USA Network!