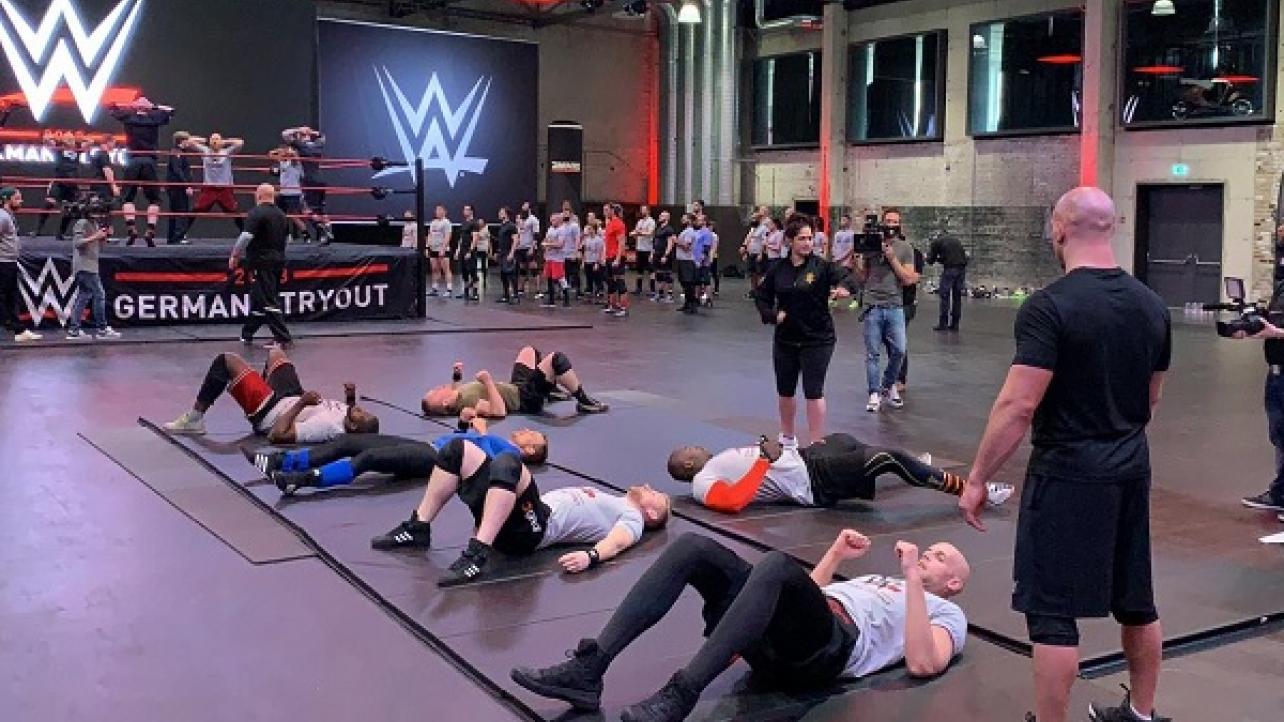 WWE Releases Details On Talent In First-Ever Tryout In Germany

WWE will be holding a four-day tryout camp in Cologne, Germany as part of their European tour.

More than 40 men and women are taking their first step toward WWE Superstardom this week at WWE’s historic first-ever talent tryout in Germany.

The tryout, which began Sunday and continues through Wednesday, is being held at Motorworld in Cologne and features athletes representing nearly two dozen different countries. WWE Performance Center Head Coach Matt Bloom, Robbie Brookside and Sarah Stock are leading the camp, and two of NXTs European Superstars, Germany’s Marcel Barthel and Italy’s Fabian Aichner, are on hand to assist with guiding the prospects through the drills.

Among those attending the tryout are:

Ilja Rukober, better known by the ring name Ilja Dragunov. Born in Russia, Rukober was trained by SmackDown Superstar Alexander Wolfe and made his pro debut six years ago. A former Shotgun Champion for the German-based Westside Xtreme Wrestling, he won the promotion’s 16 Carat Gold Tournament in 2016 and, more recently, wrestled WWE U.K. Champion Pete Dunne in a match for PROGRESS Wrestling.

Third-generation French grappler Camille Grignon. A ring veteran of eight years, the 25-year-old Grignon has fought against and alongside the likes of former Mae Young Classic competitors Killer Kelly, Jazzy Gabert and Ayesha Raymond. She is also a trapeze artist at a circus school.

Jurn Sijtzema, aka Jurn Simmons, a 6-foot-2, 250-pounder from Heeg, Netherlands. Sijtzema, who attended a WWE tryout in London in 2017, is a former wXw Unified World Wrestling Champion. He has competed in the U.S., the Middle East, and throughout Europe and the U.K.

20-year-old French wrestler Edwige Trabouillet, who wrestles professionally under the alias Mila Smidt. Trabouillet was a freestyle grappler and gymnast before turning to sports-entertainment two years ago.

Independent wrestling veteran Emil Sitoci of Netherlands. With a background in judo and gymnastics, Sitoci moved to the U.S. at age 18 to learn how to wrestle. He has battled the likes of Kevin Owens, Jushin “Thunder” Liger and Billy Gunn.

Croatia’s Vesna Busic-Chaer, who competes under the alias of Wesna. Busic-Chaer broke into sports-entertainment in 1998 and has wrestled in more than 20 countries, including the U.S. and Japan.

28-year-old Christopher Oketch, a 6-foot-3 strongman who has won competitions in Qatar and his native Kenya.

Follow WWE Digital in the coming days for more coverage of the Cologne tryout. For more information on how to apply for a future WWE tryout, visit WWEPerformanceCenter.com.

WWE Releases Details On Talent In First-Ever Tryout In Germany