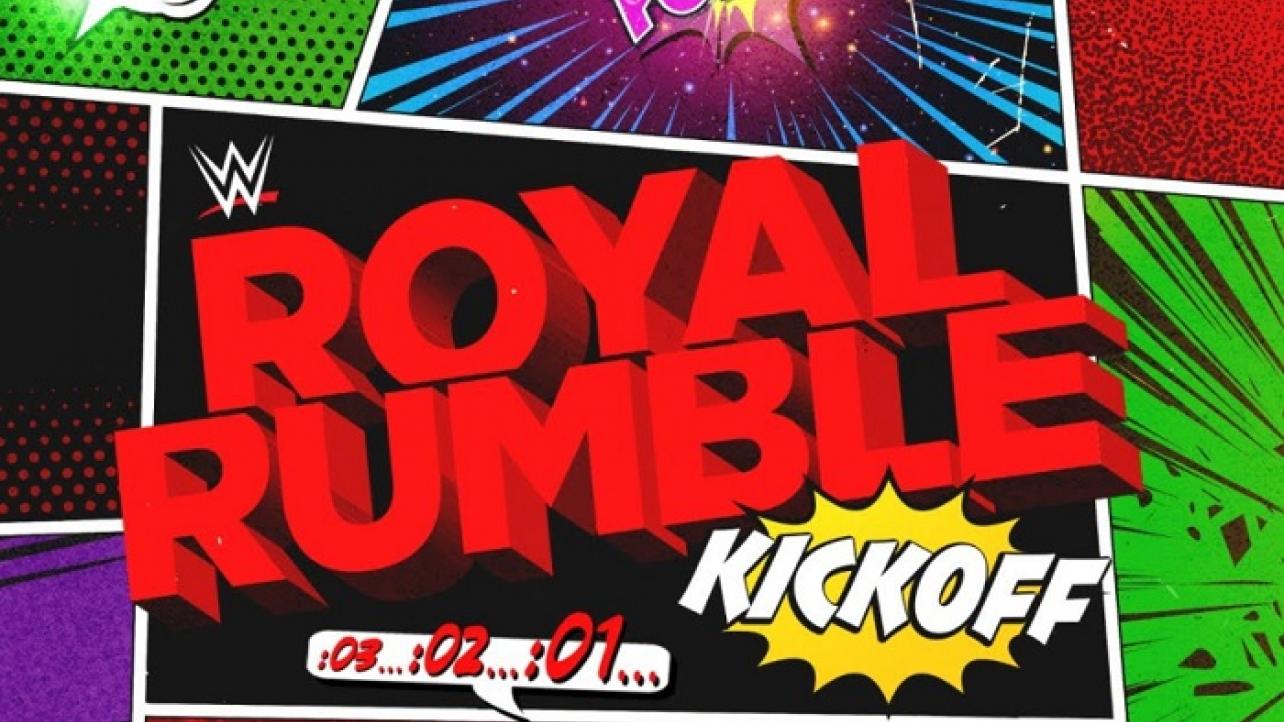 The 2021 WWE Royal Rumble pay-per-view event is almost upon us, however before it gets underway, WWE first presents Royal Rumble Kickoff.

The WWE Royal Rumble 2021 Kickoff Show is in progress and can be viewed via the video player embedded below courtesy of the official WWE YouTube channel.

Watch the action unfold throughout the duration of the Kickoff Show right here on this page and make sure to keep your browsers locked to eWrestling.com all evening long as we present the most in-depth, comprehensive live results coverage of tonight’s WWE Royal Rumble 2021 event.

Make sure to let your voice be heard all night long as well by commenting in the Comments section at the bottom of this page.

The 2021 WWE Royal Rumble Kickoff Show gets underway across all of WWE’s digital platforms. We see the camera pan around the ThunderDome, which is complete with the Royal Rumble set-up for tonight.

The camera then lowers down to the Kickoff Show area where Charly Caruso welcomes us to the show. The panel on the Kickoff Show consists of Jerry “The King” Lawler, Booker T, JBL and Peter Rosenberg.

The Kickoff Show panel starts running down the lineup for tonight’s show and then introduce the official music video for the official Royal Rumble theme, which is in honor of Booker T — the music video of which also features the WWE Hall Of Fame legend.

Backstage With Carmella & Her Assistant Reginald

After running down some of the matches on the card and introducing various video packages showing the history behind some of the rivalries heading into tonight, they send things backstage to Carmella with her assistant.

Carmella complains about her situation and then gets lippy with her assistant before commenting that her drink tastes like gold. She laughs to end the segment.

Now we return live inside the ThunderDome where the Kickoff Show panel is joined by Sonya Deville. Deville greets and banters with the panelists before breaking down the Sasha Banks vs. Carmella match for the championship on tonight’s PPV.

After Deville helps run down the women’s title match between Banks and Carmella, she exits the panel and the panelists continue running down additional matches scheduled for tonight, as well as setting up more video packages.

Following a Cricket Wireless commercial, we see shots from the Crickett At Home Fan Zone camera, which features various shots of WWE Superstars and some of their families sitting together and watching tonight’s PPV.

We head back to the panel where they set up another video package, this time for the WWE Universal Heavyweight Championship Last Man Standing match between Roman Reigns and Kevin Owens.

Another “earlier today” type of brief segment airs with Natalya talking about tonight’s show and how she plans to come out of the evening with a victory.

R-Truth then crashes the Kickoff Show panel where he is dressed up like a hunter, carrying his WWE 24/7 Championship. Truth is “hunting wabbits right now” as he jokes about for a while to explain why he is in disguise. He claims no one will notice him and mentions tonight is all about Bugs Bunny. Booker T finally corrects him to inform him that it’s Bad Bunny, the man who sings the official theme song for WWE Royal Rumble 2021.