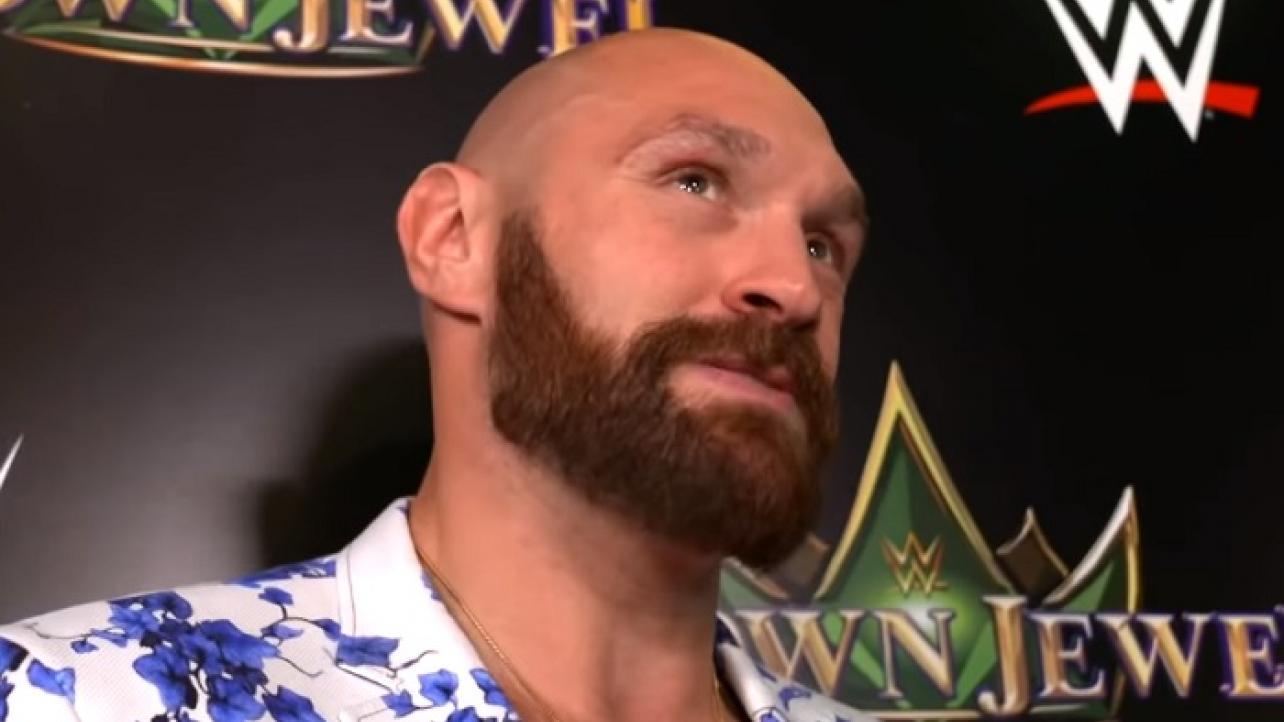 WWE returns to the SNHU Arena in Manchester, New Hampshire this evening for this week’s edition of WWE Friday Night SmackDown On FOX.

In the wake of last week’s NXT take over, SmackDown Superstars are out to make a statement as Roman Reigns battles King Corbin, Tyson Fury makes a blue brand appearance and The New Day gets a title opportunity against The Revival.

The King has been demanding respect, but The Big Dog answers to no one in his own yard.

While appearing on WWE Backstage on FS1, Roman Reigns was blindside attacked by King Corbin and now the two will collide on Friday Night SmackDown.

The two adversaries are now set to meet in the aftermath of the Team Hogan’s WWE Crown Jewel victory over Team Flair led by Reigns’ heroics.

Can The Big Dog get retribution on Corbin, or will the King reign over Reigns? Find out this Friday night on SmackDown on FOX at 8/7 C.

Tyson Fury returns to SmackDown on FOX this Friday

In the wake of a debut victory at WWE Crown Jewel, Tyson Fury will head to Friday Night SmackDown this week on FOX.

As reported on WWE Backstage, The Gypsy King is slated to appear when the blue brand broadcasts from the lineal heavyweight champion’s hometown of Manchester, England. With Fury in the building, Braun Strowman shouldn’t be far behind as the two brawlers have unfinished business.

Are Fury and Strowman headed for another epic collision?

Tune in to Friday Night SmackDown on FOX at 8/7 C to see what’s next for the two heavyweight competitors.

The New Day bested The Revival in Eight-Man Tag Team competition two weeks ago, and now they will reap the rewards.

The New Day will challenge The Revival for the SmackDown Tag Team Titles on Friday Night SmackDown. The showdown of the last two SmackDown Tag Team Champions promises to carry a lot of the bad blood that has defined this blue brand rivalry.

Can The New Day ride the momentum of their pin over The Revival in the Tag Team Turmoil Match at WWE Crown Jewel or will the ensuing attack by the SmackDown Tag Team Champions turn down The Power of Positivity? Find out this Friday at 8/7 C on FOX.

Get back to work. The Boss is back and set for battle against Nikki Cross on Friday Night SmackDown.

Sasha Banks last competed in a Hell in a Cell showdown against Raw Women’s Champion Becky Lynch. Since that devastating defeat, The Boss has rallied behind her close friend Bayley by lending a hand to the SmackDown Women’s Champion in her victory over challenger Nikki Cross.

Now Cross seeks payback for The Boss’ involvement and the role she played in costing the former Women’s Tag Team Champion a chance to win the title.

Tune in to Friday Night SmackDown on FOX at 8/7 C to find out.

Make sure to join us here at eWrestling.com TONIGHT for LIVE WWE Friday Night SmackDown On FOX Results coverage from Manchester!