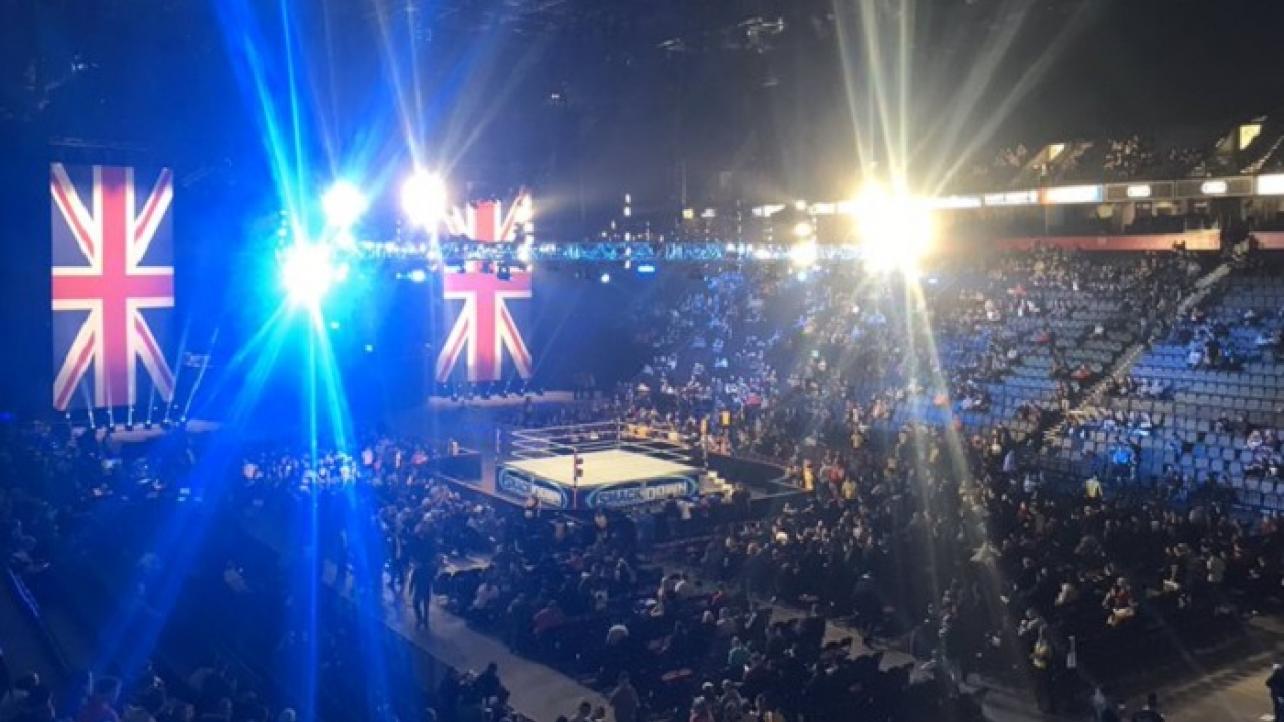 WWE runs the Manchester Arena in Manchester, England this afternoon, as they tape this week’s episode of WWE Friday Night SmackDown On FOX.

Follow our live results coverage of the show as it happens live right here on this page.

* The arena has a different look for the tapings in Manchester, England. Check out photos of the WWE UK set-up for the SmackDown On FOX set for this week’s episode below.

* King Corbin opens up this week’s show after the opening pyro explodes and the show kicks off. The crowd boos as Corbin begins SmackDown on FOX from Manchester. He calls out Roman Reigns, leading to the two going back-and-forth on the mic. Corbin claims “The Big Dog’s” testicles are the size of marbles. Reigns ends up shining to end the segment.

* Backstage, Kayla Braxton is with The New Day. Big E. goes on to talk about having to win the SmackDown Tag-Team Championships tonight so they can catch up with the record-number of title reigns Charlotte Flair holds.

The New Day vs. The Revival (SmackDown Tag-Team Titles)

We head back to the ring for our first match of the evening here in Manchester, and it is the SmackDown Tag-Team Title match that was just referenced in the previous backstage segment.

The New Day, with Big E. and Kofi Kingston representing the group, will be challenging Scott Dawson and Dash Wilder — The Revival — for the richest prize in tag-team wrestling on the blue brand.

The match gets underway and when all is said-and-done, Big E. and Kofi Kingston manage to get their hands raised, as they are now the NEW WWE SmackDown Tag-Team Champions.

After The Match: Imperium Strikes!

Once the match was over and the title change occured, NXT UK’s Imperium hits the ring to attack until eventually Heavy Machinery runs down to try and even up the numbers game against WWE UK Champion WALTER, Fabian Aichner, Marcel Barthel and Alexander Wolfe. That wasn’t enough, so eventually more SmackDown stars hit the ring to chase off the dominant NXT UK faction.

Next up inside the ring here at the Manchester Arena for SmackDown is a tag-team match pitting WWE Intercontinental Champion Shinsuke Nakamura and Cesaro against the duo of Ali and Shorty G.

This one is given a little bit of time to develop, and featured Sami Zayn still trying to get Daniel Bryan to join he and Nakamura’s team.

Bryan simply watched the match from the entrance stage, despite the fact that Zayn invited him to watch the match from ringside. When all was said-and-done, the team of Cesaro and Nakamura got their hands raised.

This match is in progress now, with SmackDown Women’s Champion Bayley featured as a guest commentator at the announce table.

Bayley gets involved near the finish of this one, as she provided an assist to “The Boss” which allowed Banks to pick up the “W.”

After The Match: Shayna Baszler Attacks!

This one was a pretty basic match that was kept relatively short, and saw Carmella and Dana Brooke go over, earning two of the available spots on the SmackDown women’s team at Survivor Series later this month.

The advertised featured match for this week’s SmackDown, “The Big Dog” Roman Reigns vs. “King” Baron Corbin is up next. We’ve still got Tyson Fury’s return and much more to go.

This turned out to be the main event inside the squared circle in terms of matches for this week’s show.

The finish saw Corbin pick up the victory after getting an assist from the team of Dolph Ziggler and Robert Roode.

Finally, as advertised, lineal boxing heavyweight champion of the world, “The Gypsy King” Tyson Fury, makes his WWE return as he comes down to the ring for the final segment of the taping.

“The Gypsy King” talks about making his WWE debut with a win at WWE Crown Jewel and then calls his opponent from the show, “The Monster Amog Men” Braun Strowman, to join him in the ring.

Strowman makes his way out and Fury tells him he wants to form a tag-team with him. They end up getting confronted by The B-Team — Bo Dallas and Curtis Axel.

Dallas and Axel come out and get in Strowman and Fury’s face, leading to a brawl that saw “The Monster Among Men” and “The Gypsy King” take out the smaller opposition. They pose together in the ring after clearing house to end the show.

NOTE #2: WWE debuted a new UK-inspired set for the arena for SmackDown in Manchester. Check out exclusive photos of the new look below.

@RajGiri_303 looks like wwe couldn’t be bothered to build either the smackdown set or raw set for today’s tapings! #WWEUKTour pic.twitter.com/6c6ZvrwrFE