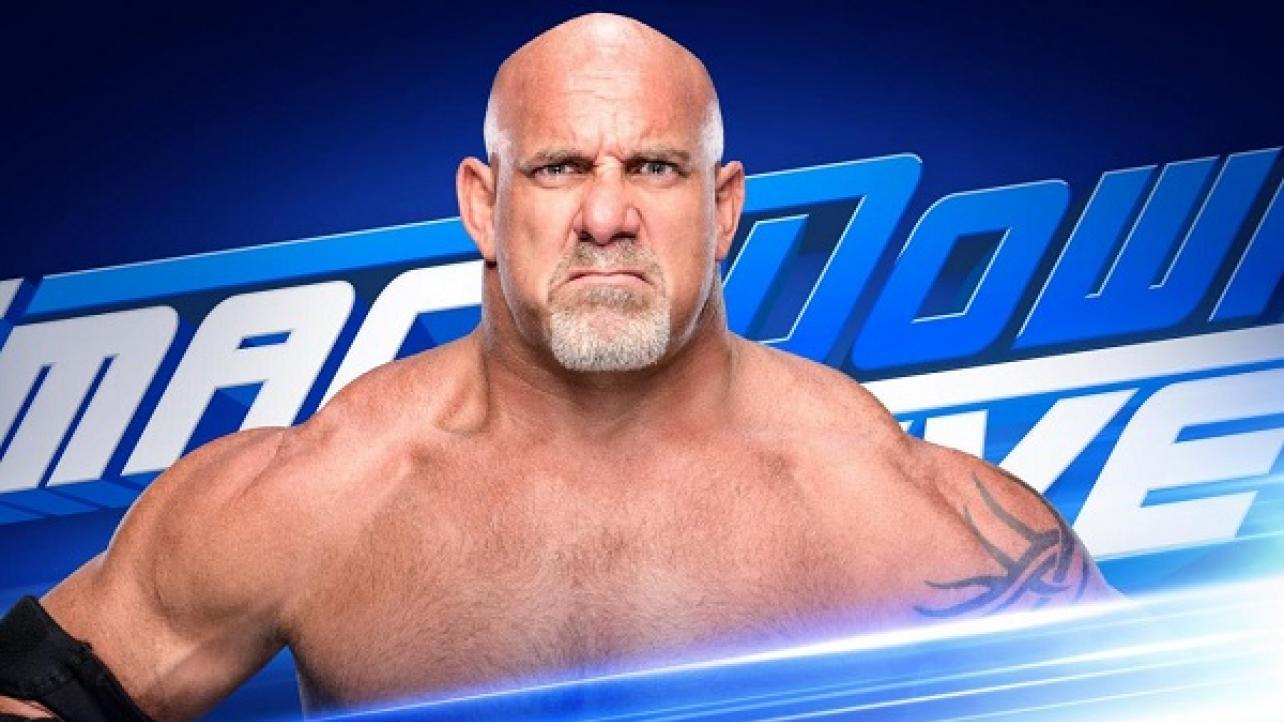 WWE returns to the Sames Auto Arena in Laredo, Texas this evening for the WWE Super Show-Down 2019 “go-home” edition of WWE SmackDown Live.

SmackDown LIVE preview, June 1, 2019: Goldberg comes to the blue brand for the first time ever

Three days before his highly anticipated matchup against The Undertaker at Super ShowDown, WWE Hall of Famer Goldberg will journey to SmackDown LIVE for the first time ever tonight. How will he respond to The Deadman’s claims that he will rest in peace? Find out tonight at 8/7 C on USA Network!

Goldberg comes to SmackDown LIVE for the first time ever

Three days before his highly anticipated matchup against The Undertaker at Super ShowDown, WWE Hall of Famer Goldberg will journey to SmackDown LIVE for the first time ever!

The former Universal Champion hasn’t set foot in a WWE ring since the night after he battled Brock Lesnar at WrestleMania 33. It does not go unnoticed that Goldberg is choosing to appear on SmackDown, the brand with which The Phenom has long been associated. What are Goldberg’s intentions and what will his rare appearance mean for his once-in-a-lifetime clash with The Deadman this Friday?

Find out on the final stop en route to Super ShowDown, days before the two legends collide in a contest that promises to be one of the top matches of the year.

One week after Bayley’s hard-fought victory over Lacey Evans led to post-match chaos between The Lady and an interfering Charlotte Flair, the SmackDown Women’s Champion is scheduled to be Alexa Bliss’ special guest on “A Moment of Bliss.” How will The Goddess of WWE stir the pot in an already highly volatile Women’s division?

Lars Sullivan to give an exclusive interview

Just days before he battles all three members of Lucha House Party at WWE Super ShowDown, Lars Sullivan will grant an exclusive interview on SmackDown LIVE for the first time ever.

The uncontrollable Superstar brings complete bedlam with him everywhere he goes, but will his words speak louder than his destructive actions this Tuesday on the blue brand?

Will Roman Reigns be out for payback?

Last night on Raw, Roman Reigns joined forces with his cousins, The Usos, to take on Drew McIntyre & The Revival. The family looked to have Shane McMahon’s cohorts on the ropes until Shane-O-Mac got involved, leading to a victory for The Scottish Terminator and the “Top Guys” and vicious post-match attack on Reigns that included a Shatter Machine, Claymore and a Spear from McMahon.

With mere days until The Big Dog’s showdown with The Best in The World at WWE Super ShowDown, will Reigns be looking to get retribution?

The rivalry between WWE Champion Kofi Kingston and Dolph Ziggler is reaching a fever pitch as their title clash at WWE Super ShowDown approaches.

When we last saw The Showoff, he was brutally attacking Kofi’s New Day running buddy, Xavier Woods, with a steel chair until the WWE Champion made the save. Last Tuesday, Kingston defeated Kevin Owens in one-on-one action, putting KO behind him and seemingly ensuring that he can give his full attention to Ziggler and Super ShowDown.

Will these two rivals come to blows as they prepare for a huge WWE Championship battle on Friday? Find out tonight on SmackDown LIVE at 8/7 C on USA Network!