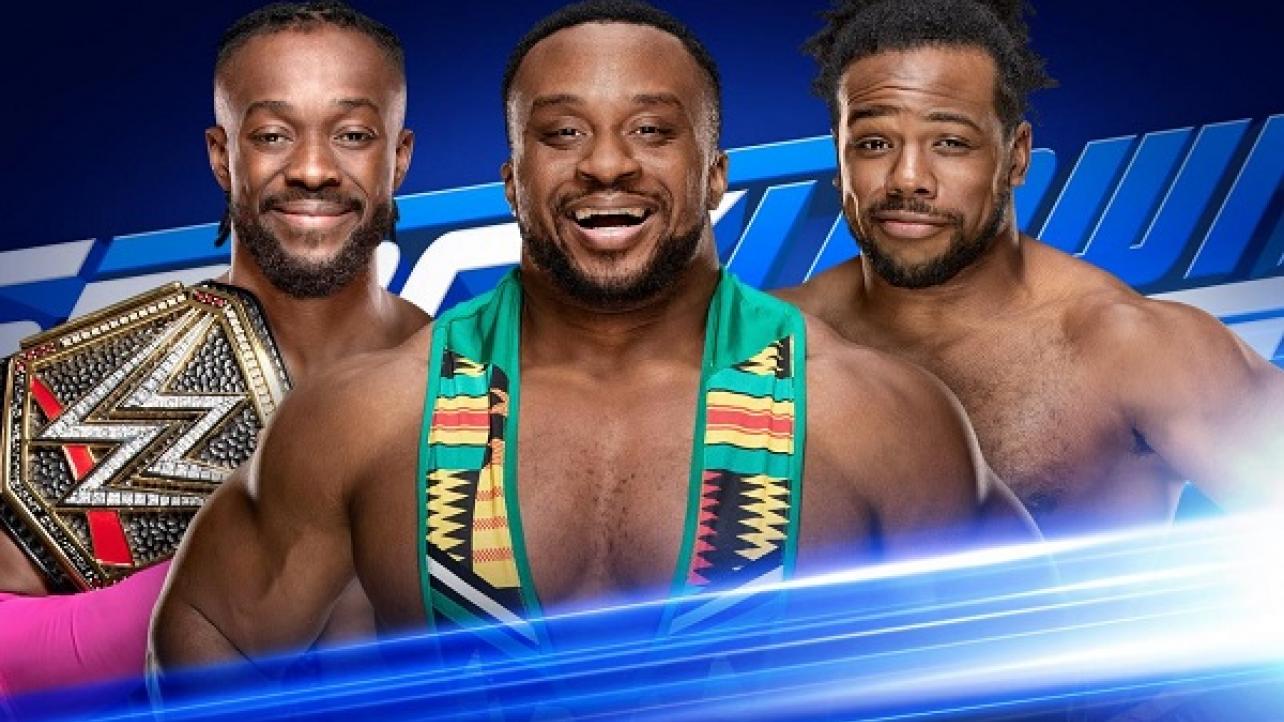 WWE returns to the Dunkin’ Donuts Center in Providence, Rhode Island this evening for the post-WWE Money In The Bank 2019 edition of WWE SmackDown Live.

SmackDown LIVE preview, May 21,2019: The New Day to throw a Welcome Back Celebration for Big E

He’s back! After a month on the shelf following knee surgery, Big E is returning to SmackDown LIVE, which is cause for a party! The New Day are throwing a Welcome Back Celebration you won’t want to miss for their friend. What do WWE Champion Kofi Kingston and Xavier Woods have planned? Find out when the celebration kicks off SmackDown LIVE, tomorrow night at 8/7 C on USA Network!

After spending the past month on the shelf (and Twitter) following knee surgery, Big E is returning to SmackDown LIVE, and The New Day could not be happier! In fact, WWE Champion Kofi Kingston and Xavier Woods are throwing a celebration you won’t want to miss. What do they have planned to welcome back their friend? Find out when SmackDown LIVE kicks off at 8 ET on USA!

What will SmackDown Women’s Champion Bayley say in exclusive interview?

Bayley stunned the world at WWE Money in the Bank, first by winning the Women’s Ladder Match to earn the contract for a guaranteed championship match, then by cashing in and defeating Charlotte Flair to win the SmackDown Women’s Title mere moments after The Queen dethroned Becky Lynch.

Now that she’s at the top of Team Blue, how will Bayley start her reign? We’ll find out during an exclusive interview with the new champion.

Though Elias smashed a guitar over his back before their match on Sunday, Roman Reigns would not let the crooner escape WWE Money in the Bank unpunished. The Big Dog floored Elias with a Superman Punch on the entranceway and followed up with a ring-rattling Spear to pick up the victory.

However, the score is far from settled between the two, as they will collide in a WWE Money in the Bank rematch on SmackDown LIVE. To make matters more complicated, Reigns’ WWE Super ShowDown opponent, Shane McMahon, will be in Elias’ corner. Who will walk out of SmackDown LIVE victorious?

Who will bring the 24/7 Championship to SmackDown LIVE?

WWE Hall of Famer Mick Foley came to Raw last night to make a major announcement, unveiling the WWE 24/7 Championship – a title that can be won and defended at any time, day or night, as long as a WWE official is present.

It was chaos from there as Superstars scrambled to the ring to become the first champion. Titus O’Neil earned the unique distinction after emerging with the title from a frantic scramble for the championship. However, O’Neil didn’t make it out of the arena with the title. First, he was defeated by Robert Roode during his celebration. Roode, who spent the rest of Raw on the run from his fellow Superstars, was dethroned by SmackDown LIVE’s R-Truth, who hid The Glorious One in the trunk of his car to throw the chasing Superstars off his scent. A waiting referee in the passenger seat gave Truth the opening to pin Roode and claim the title for himself. Will Truth make it to SmackDown LIVE as the champion, or will one (or more) Superstars take hold of WWE’s newest championship?

Daniel Bryan’s promise to change tag team competition hit a bump in the road during the WWE Money in the Bank Kickoff when he and Rowan lost to The Usos in a non-title match.

A strangely meditative Bryan was interviewed after the battle, during which he promised to “stand up” and reevaluate his revolution. Will he show the results of his reflections? Find out on SmackDown LIVE, tonight at 8/7 C on USA Network!

Make sure to join us here at eWrestling.com later this evening for play-by-play results coverage of WWE SmackDown Live!