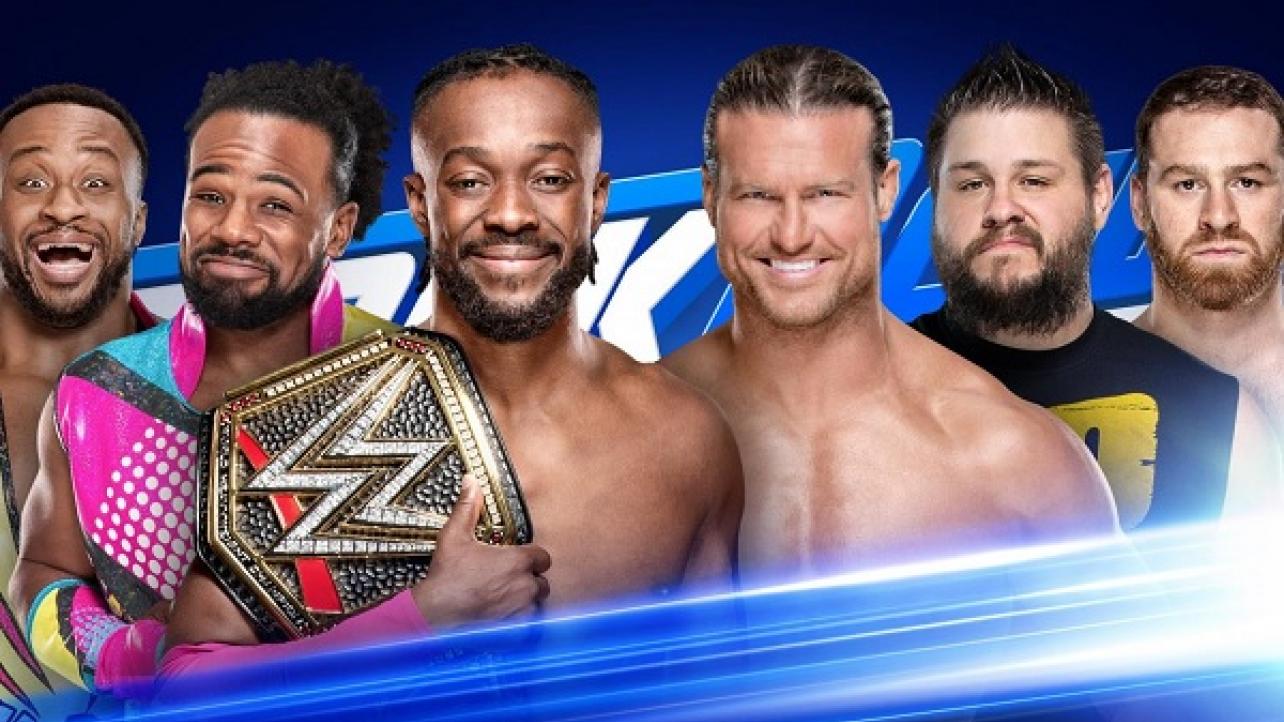 The blue brand returns to the USA Network this evening, as WWE SmackDown Live goes down from the Golden 1 Center in Sacramento, California this evening.

The New Day are back at full strength, and they’re wasting no time getting back into action. Big E, after a stint on the shelf with a knee injury, is ready to get back to action. He’ll join WWE Champion Kofi Kingston & Xavier Woods for a huge Six-Man Tag Team Match, where The New Day will square off with Kingston’s WWE Stomping Grounds opponent, Dolph Ziggler, and Kevin Owens & Sami Zayn, with whom the pancake-loving trio have no love lost. Who will emerge victorious from this epic battle? Find out on SmackDown LIVE, tonight at 8/7 C on USA Network.

The New Day return to clash with Ziggler, Owens & Zayn

WWE Champion Kofi Kingston walked out of Super ShowDown with a win over Dolph Ziggler, but The Showoff immediately demanded a title rematch after Xavier Woods got involved. To prevent anyone from interfering in a potential rematch, Ziggler asked for a Steel Cage Match, and he will get his wish at WWE Stomping Grounds.

However, tonight on SmackDown LIVE, it will be three-on-three, as The New Day return at full strength to take on Ziggler, Kevin Owens & Sami Zayn in a huge Six-Man Tag Team Match. Big E is back from the knee injury that put him out of action and is ready to back up the WWE Champion and Woods, while Ziggler has found allies in KO & Zayn, who have no love lost with the pancake-loving trio.

Who will claim a monumental victory heading into WWE Stomping Grounds?

Last night on Raw, Shane McMahon and Drew McIntyre threw a Super ShowDown celebration to gloat over The Best in The World’s victory against The Big Dog last Friday in Jeddah. The Scottish Terminator also vowed to maim Reigns beyond recognition when the two clash at WWE Stomping Grounds on Sunday, June 23.

Will The Big Dog have anything to say in response?

Will R-Truth hang on to the 24/7 Championship?

R-Truth has made it out of some sticky situations while holding the 24/7 Championship, whether it was on the golf course, a flight over the Red Sea or being stuck in an elevator with his fellow Superstars.

With dozens of Superstars consistently on the hunt for him at all hours, will Truth make it through another night as 24/7 Champion?

Can Bayley bounce back from tag team defeat on Raw?

SmackDown Women’s Champion Bayley had a rough go of it on Raw last night. Taking advantage of the Wild Card Rule, The Hugger arrived on the red brand to join forces with Raw Women’s Champion Becky Lynch to square off with their respective Stomping Grounds opponents — Alexa Bliss and Lacey Evans — in a champions vs. challengers tag team battle.

Unfortunately, Bayley came out on the short end, as The Sassy Southern Belle defeated her after knocking the champion out with a Woman’s Right. Can The Hugger bounce back as she prepares to battle The Goddess at WWE Stomping Grounds? Find out tonight on SmackDown LIVE at 8/7 C on USA Network!