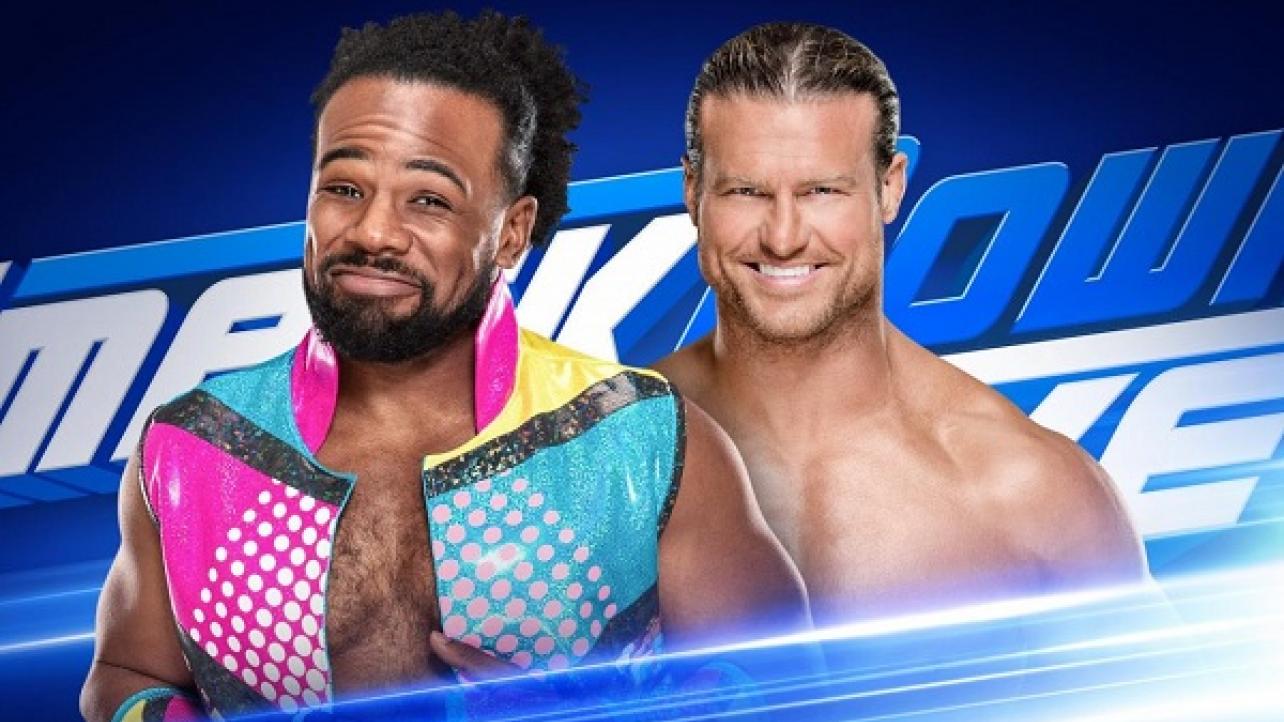 WWE returns to the Citizens Business Bank Arena in Ontario, California this evening for the WWE Stomping Grounds 2019 pay-per-view “go-home” edition of WWE SmackDown Live on the USA Network.

With just five days before their WWE Championship Steel Cage Match at Stomping Grounds, Kofi Kingston and Dolph Ziggler are looking to gain momentum heading into the huge battle. The Showoff will get a chance to do just that when he takes on Kingston’s New Day brethren, Xavier Woods. Will Ziggler get the upper hand heading into the Steel Cage, or will Woods soften up The Showoff for the WWE Champion? Find out on SmackDown LIVE, tonight at 8/7 C on USA Network!

With Dolph Ziggler’s WWE Title opportunity against Kofi Kingston inside the confines of a Steel Cage at WWE Stomping Grounds rapidly approaching, Xavier Woods will look to get a crack at The Showoff a few days earlier tonight on SmackDown LIVE.

Woods and Ziggler have mixed it up numerous times since Ziggler’s return last month, including a chaotic brawl on Raw that saw the two Wild Cards battle all over the arena. Woods, of course, ultimately played a vital role in the WWE Title Match at WWE Super ShowDown, which led to Dolph petitioning for a Steel Cage rematch at WWE Stomping Grounds. Will Xavier get one last measure of retribution against Ziggler before his New Day brother Kofi gets at him next Sunday? Or will The Showoff make the ultimate statement to Kingston by downing his friend just five nights before their Steel Cage clash?

SmackDown Women’s Champion Bayley and Alexa Bliss will square off with the title on the line at WWE Stomping Grounds, but just days before that bout they will meet on Bliss’ always-lively talk show, “A Moment of Bliss.”

With so much on the line next Sunday, will tensions overflow between The Hugger and The Goddess? And will Bliss’ new BFF Nikki Cross factor into the proceedings? Find out when “A Moment of Bliss” loaded with combustible elements goes down tonight.

What will be the fallout of Roman Reigns’ attack on McMahon & McIntyre?

Last night on Raw, Drew McIntyre seemingly crossed the line when he targeted Roman Reigns’ family in a war of words, just days before their battle at WWE Stomping Grounds. The Scottish Psychopath’s rant sent The Big Dog into a rage.

Reigns hunted down McIntyre in Shane McMahon’s VIP room, where The Big Dog slammed McIntyre through a table, then chased Shane-O-Mac into the arena. The Best in the World thought he had gotten away from Reigns, only for The Big Dog to fly over the barricade and go on the attack, demolishing McMahon with a Superman Punch and Spear.

Will there be any fallout from this wild throwdown just five nights before Reigns and McIntyre square off at Stomping Grounds?

SmackDown Tag Team Champions Daniel Bryan & Rowan have had Heavy Machinery on their radar ever since Otis & Tucker issued a challenge for the titles. However, Bryan & Rowan have yet to grant the blue-collar pair a title opportunity, instead opting to mock the duo, saying that they won’t be receiving a title match because Otis is “extraterrestrial.”

Heavy Machinery sent a message to the champions last week by demolishing the Yolo County Tag Team Champions, but will they get a chance at the blue brand’s tag team titles sometime soon?

Can R-Truth hang on to the 24/7 Championship?

The case containing 24/7 Champion R-Truth made it to Los Angeles for Raw last night, and a disguised Truth and Carmella attempted to watch the red brand from the WWE Universe.

Unfortunately, several Superstars saw right through their costumes, and the chase was on. The 24/7 Champion scrambled under the ring, where he ran into Titus O’Neil, and eventually escaped with the title still in his grasp.

Will Truth make it through Tuesday night with his coveted title? Find out on SmackDown LIVE, tonight at 8/7 C on USA Network!