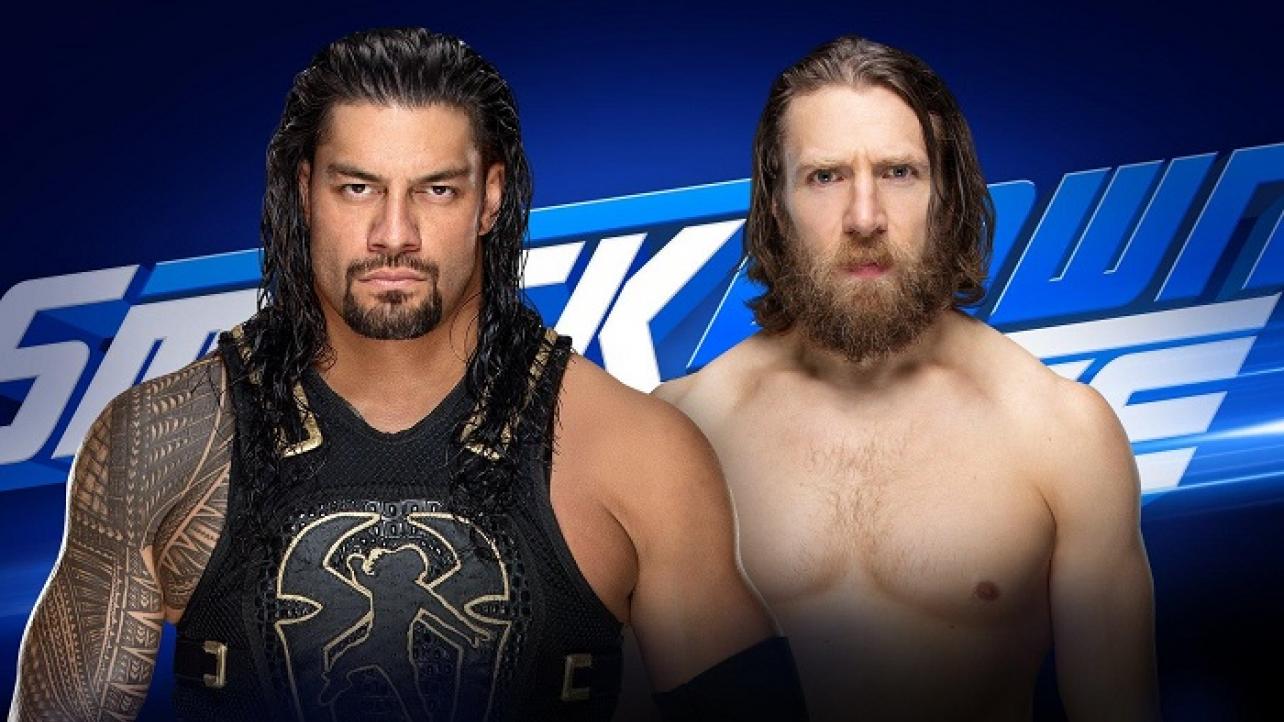 WWE returns to the Chase Center in San Francisco, California this evening for this week’s episode of SmackDown LIVE, the final edition of the show to air on the USA Network before next week’s premiere of Friday Night SmackDown on FOX.

Roman Reigns intends to clear the air with Daniel Bryan after last week’s attack by Erick Rowan and Luke Harper left them both destroyed. Kofi Kingston will conduct a special sit-down interview to discuss his upcoming WWE Title match against Brock Lesnar. Carmella also is set to team with Charlotte Flair against Bayley and Sasha Banks.

Roman Reigns to clear the air with Daniel Bryan

Roman Reigns wants to talk to Daniel Bryan to clear the air, and Bryan has agreed to meet with The Big Dog face to face. This conversation comes after weeks of tension between Reigns and Bryan following the mysterious attacks on The Big Dog.

After it was revealed that Bryan’s protege Erick Rowan was behind the attacks, Bryan had some harsh words for his large ally. Last week, Erick Rowan and the recently returned Luke Harper even laid out Bryan, and Reigns surprisingly came to Bryan’s aid — to no avail.

What will Reigns have to say to Bryan? Find out on SmackDown LIVE, Tuesday on USA Network at 8/7 C.

Brock Lesnar sent a beast of a message to WWE Champion Kofi Kingston last Tuesday on SmackDown LIVE when he and Paul Heyman challenged the champion to a Title Match on Oct. 4 and The Beast Incarnate F-5’d Kingston.

The fighting champion has since accepted Lesnar’s challenge and will have a special sit-down interview on Tuesday to talk about the anticipated showdown.

Find out what Kingston has to say on SmackDown LIVE, Tuesday on USA Network at 8/7 C.

Charlotte Flair to team with Carmella against Bayley & Sasha Banks

Carmella surprisingly came to Charlotte Flair’s rescue last week to stop a two-on-one attack from SmackDown Women’s Champion Bayley and Sasha Banks. This Tuesday on SmackDown LIVE, ’Mella will team up with Flair against Bayley and Banks in tag team action.

How will this unlikely pairing work together against a set of former WWE Women’s Tag Team Champions?

Find out who will stand tall on SmackDown LIVE, Tuesday on USA Network at 8/7 C.

Shane McMahon invited Kevin Owens to SmackDown LIVE to settle the lawsuit that Owens had served to McMahon last Tuesday. After being pronounced fired the previous week, KO emerged in the crowd only to have Shane-O-Mac call him into the ring to address his record lawsuit.

Now it appears McMahon may be open to finding a way to settle the dispute with Owens in a different way.

This is an important time for @WWE and its Superstars. We can not afford to have distractions therefore I am inviting @FightOwensFight to #SDLive tonight so we can settle this lawsuit once and for all.

Will Owens accept the invitation and come face to face with Shane?