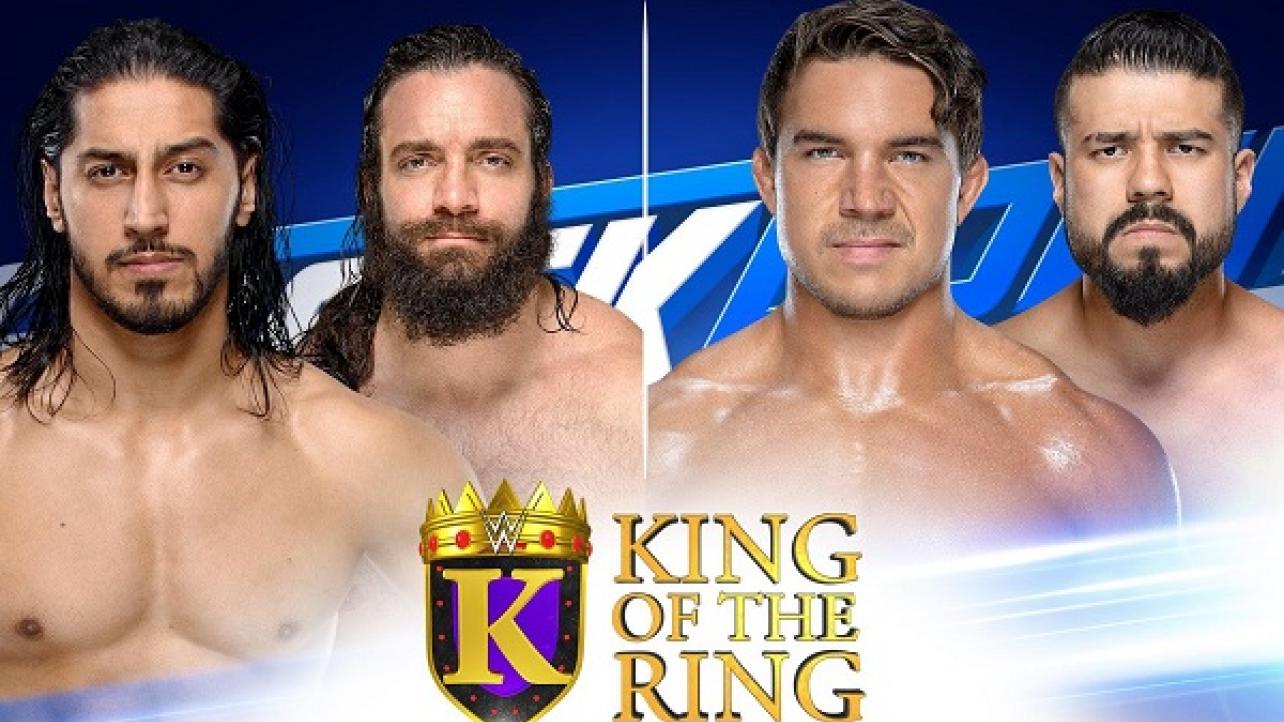 WWE returns to the Norfolk Scope Arena in Norfolk, Virginia this evening as they present this week’s episode of WWE SmackDown LIVE on the USA Network, featuring the blue brand quarterfinal matches for the 2019 WWE King of the Ring tournament.

The King of the Ring Quarterfinals wrap up tonight on SmackDown LIVE with two huge battles. After his thrilling victory over Buddy Murphy, can Ali topple Elias and punch his ticket to the semifinals? And after putting an end to Shelton Benjamin’s mockery of his height in the first round, Chad Gable must now outwrestle Andrade if he wants to move one step closer to the crown. Who will move on to the next round of King of the Ring? Find out tonight on SmackDown LIVE at 8/7 C on USA Network!

Ali clashes with Elias in King of the Ring quarterfinal action

SmackDown’s portion of the King of the Ring Quarterfinals includes what is sure to be an intense battle between Ali and Elias. In the first round, Ali advanced by defeating Buddy Murphy in a hard-hitting, high-flying affair, while Elias had an assist from Shane McMahon in ousting Kevin Owens from the tournament two weeks ago.

Who will emerge victorious and move one step closer to the crown?

The blue brand’s other King of the Ring Quarterfinal bout pits Chad Gable against Andrade. After weeks of Shelton Benjamin mocking him for his height, Gable showed his former tag team partner that size isn’t everything by eliminating him from the tournament. But the Olympian’s path to the crown now runs through Andrade, who is riding high after a string of victories over Rey Mysterio and a win against Apollo Crews in the first round.

Who will claim the final spot in the King of the Ring Semifinals?

Last Tuesday, Roman Reigns revealed that, despite Daniel Bryan’s insistence, Erick Rowan was indeed behind the heinous attacks on The Big Dog. In the wake of this revelation, a furious Bryan slapped his ally and continued to insist that he had nothing to do with the attacks. Reigns, appearing not to buy Bryan’s story, silenced The Planet’s Champion with a thunderous Spear.

Despite the evidence pointing to him being guilty by association, Bryan maintains that Erick Rowan acted alone and claimed that he still deserves an apology from Reigns.

Will The Big Dog forgive him?

Will Kofi Kingston be out for payback after Orton’s vicious attack?

Last week on SmackDown LIVE, Randy Orton sent WWE Champion Kofi Kingston into a rage by once again targeting the champion’s family, this time by reading a letter allegedly from Kingston’s son.

Kingston’s fury seemingly played right into The Viper’s hands, as the WWE Champion charged to the backstage area to brawl with Orton. WWE’s Apex Predator took advantage of the close quarters, driving Kingston into the floor with a DDT.

The WWE Champion is sure to be looking to make Orton pay ahead of their title showdown at WWE Clash of Champions. Will he be out for retribution tonight?

What will be the fallout of Bayley’s shocking attack on Becky Lynch?

SmackDown Women’s Champion Bayley shocked the WWE Universe on Monday Night Raw when she viciously attacked Raw Women’s Champion Becky Lynch, smashing The Man repeatedly with a steel chair. Initially, Bayley snatched the chair away from Sasha Banks, seemingly preventing The Boss from doing any more damage to Lynch. But after flashing a sly smile to her former tag team partner, Bayley began waylaying Becky with the weapon.

Bayley is undoubtedly still focused on her championship defense against Charlotte Flair at WWE Clash of Champions, but what lies ahead for her after she’s likely incurred the wrath of The Man? Find out tonight on SmackDown LIVE at 8/7 C on USA Network!

Make sure to join us here at eWrestling.com tonight for WWE SmackDown LIVE results coverage!