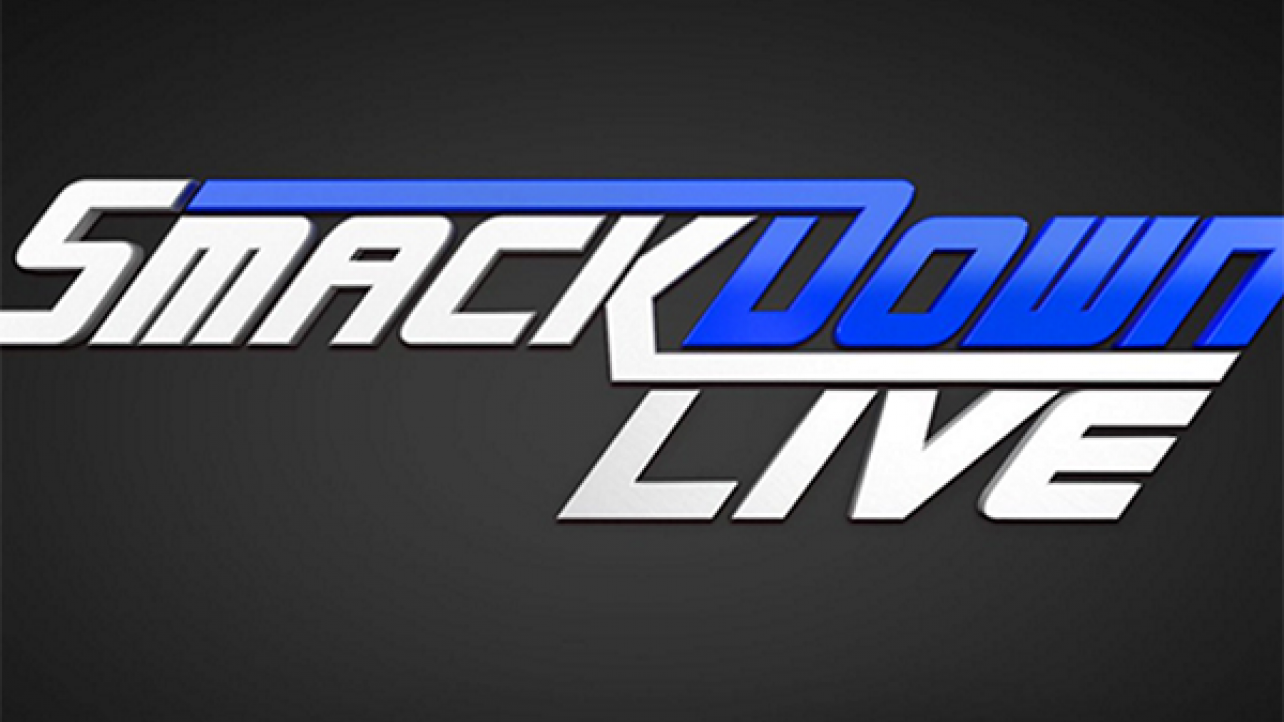 – The New Day comes out first and joins the commentary table. Shane McMahon comes out next to kick off the show. Shane gets his usual “best in the world” introduction from ring announcer Greg Hamilton. Shane gets on the mic and talks about being sick of Kevin Owens, and he talks about Kevin Owens challenging Shane to a match at SummerSlam. Shane introduces some past footage of Kevin Owens, including him quitting in 2018. Kevin Owens comes out to interrupt and starts talking trash to Shane and says he might beat the hell out of Shane right now. Shane calls Owens a quitter, and says Owens better stop right there or else he doesn’t get his SummerSlam match. Owens stares down Shane as Shane leaves.

– Intercontinental Champion Shinsuke Nakamura is shown backstage walking through the arena with his Title belt.

– Nakamura beats down Crews after the match and hits the Kinshasa on him at ringside.

– We see Mandy Rose and Sonya Deville backstage. Mandy says she’s been talking to Shane and taking care of business. Mandy says they’re getting a match against The Iiconics next week, and if they win, they get a Tag Title shot.

– The Miz is shown backstage getting ready to come out and host Miz TV with his guest Shawn Michaels.

– We see some highlights from last night’s RAW reunion, including speeches from Hulk Hogan and Steve Austin.

– The Miz comes out to the ring for tonight’s Miz TV segment. He talks about working with Shawn on the Marine 6 movie, and then introduces his guest, Hall of Famer Shawn Michaels. Shawn sits down and they talk about their work on The Marine 6, on DVD now. Shawn starts talking about Seth Rollins, and then Dolph Ziggler comes out to interrupt. Ziggler complains about the so-called legends limping down to the ring and being happy to be there. Miz says he’d be happy to punch Ziggler in the face again. Shawn says Ziggler clearly has something to get off his chest, so let’s give him a moment. Ziggler says he used to idolize Shawn, but now he’s embarrassing. Ziggler says when Shawn came back to the ring it broke his heart, and Shawn was embarrassing. Shawn says he’s not going to disagree with Dolph, it was embarrassing, but what’s more embarrassing is working your whole career and still being left with nothing but being known as a second-rate Shawn Michaels wannabe. Ziggler disagrees, and says Shawn is the only second-rate one here. Ziggler starts complaining and Miz tells Ziggler to just do something about it already. Miz and Ziggler take their coats off, but Ziggler starts to walk away. Ziggler punches Miz, then Shawn punches Ziggler. Shawn goes to help Ziggler up, then Ziggler superkicks Shawn. Miz gets up and Ziggler runs out of the ring and up the ramp. Miz checks on Shawn in the ring as Ziggler stares down from the ramp.

– Charlotte vs. Ember Moon: Within the first few seconds of this match, Bayley’s music hits and Bayley comes out to interrupt. The distraction leads to Ember rolling up Charlotte from behind for the three count after a very short match.

– Roman Reigns is shown backstage wrapping up his wrists.

– Kofi Kingston comes out to the ring and gets on the mic. Kofi says he’s here to issue a challenge to someone for SummerSlam. Kofi says he wants to call out Randy Orton. Orton comes out to the ring slowly. Kofi says he has a lot of history with Orton, and shows a replay from 2009 of them going at it. Kofi says since then he found the power of positivity and became the WWE Champion, but that Orton was trying to hold him back. Orton says he did use his influence to hold Kofi back, because Kofi wasn’t ready back then, and Kofi isn’t ready now. Orton says Kofi’s Title is a fluke, and Kofi’s 11 years of work is nothing compared to Orton’s 18 years on top. Orton says all he had to do was be himself, he never had to fake a Jamaican accent, throw pancakes, or shake his ass. Orton says Kofi doesn’t deserve the WWE Title, and Orton could take it from him whenever he wants. Kofi says they should put that to the test at SummerSlam in a match for the WWE Title. Orton says you’ve got it. Orton leaves, and Joe makes his entrance for his match with Kofi up next. Orton and Joe have a brief stare-down on the stage.

– Samoa Joe vs. Kofi Kingston This is a non-Title match. Randy Orton turns around on the ramp, and it looks like Orton is going to stay around ringside for a closer look at this match. The opening bell sounds and Joe starts off strong, but Kofi is able to drop him with a dropkick and Joe rolls outside. Kofi follows up with a suicide dive on Joe at ringside. Back in the ring, Joe fights back with a shot in the corner, then he connects with chops to the chest. Joe hits a side suplex for a two count. Kofi fires up and comes back with a series of strikes on Joe. Joe dodges the Trouble In Paradise, but Kofi connects with a flying clothesline on Joe. Orton hits the ring and the ref calls for the bell.

– Orton and Kofi have a stare-down, then when Joe gets up, Orton hits the RKO on Joe. Kofi then hits the Trouble In Paradise on Orton.

– Kevin Owens is shown backstage getting ready for his match against Reigns tonight.

– Finn Balor comes out to the ring for an in-ring interview, and we see footage of RAW last week when Bray Wyatt attacked him. Balor calls out Wyatt for a match at SummerSlam. Balor is interrupted by the Tron big screen by another episode of Bray Wyatt’s FireFly Fun House. Wyatt says he’s a fan of Balor, but “The Fiend” isn’t a fan of his. Wyatt says “The Fiend” accepts Balor’s challenge. Wyatt sys The Fiend is an abomination, and then the screen cuts to red and black, and Wyatt wearing his mask says “let me in.”

– Charlotte is backstage for an interview, where she says Ember getting the Title shot instead of her is a slap in the face.

– Shane McMahon comes out to the ring, and he introduces the guest timekeeper for the next match, Elias, and the guest referee, Drew McIntyre. Owens and Reigns come out next. Before the match, Owens gets on the mic and says he is willing to run through Reigns, McIntyre and Elias to get to Shane. Reigns takes issue and says Owens isn’t going to run through him, and Reigns might have to whoop everyone’s asses tonight.

– Roman Reigns vs. Elias: Collar and elbow tie-up to start, and Reigns backs Owens into the corner. Referee Drew McIntyre breaks it up and says he’s just doing his job. Before long, Reigns and Owens have had enough of Drew, and Reigns throws Drew out to ringside. Elias gets dropped next, and Shane is all alone. Shane flees Owens and Reigns, and then Drew and Elias get back up and start beating on Reigns and Owens. Shane joins in and they all stomp out Owens and Reigns. Owens breaks free and drops Shane, then he superkicks Drew and Elias. Reigns hits a spear on Drew. Owens hits a Stunner on Elias. Shane starts limping up the ramp, but Reigns chases him and drags him back into the ring. Reigns hits the Superman punch on Shane, then Owens hits the Stunner on Shane.

– Owens hits another Stunner on Shane, and SmackDown goes off the air with Owens and Reigns standing tall.