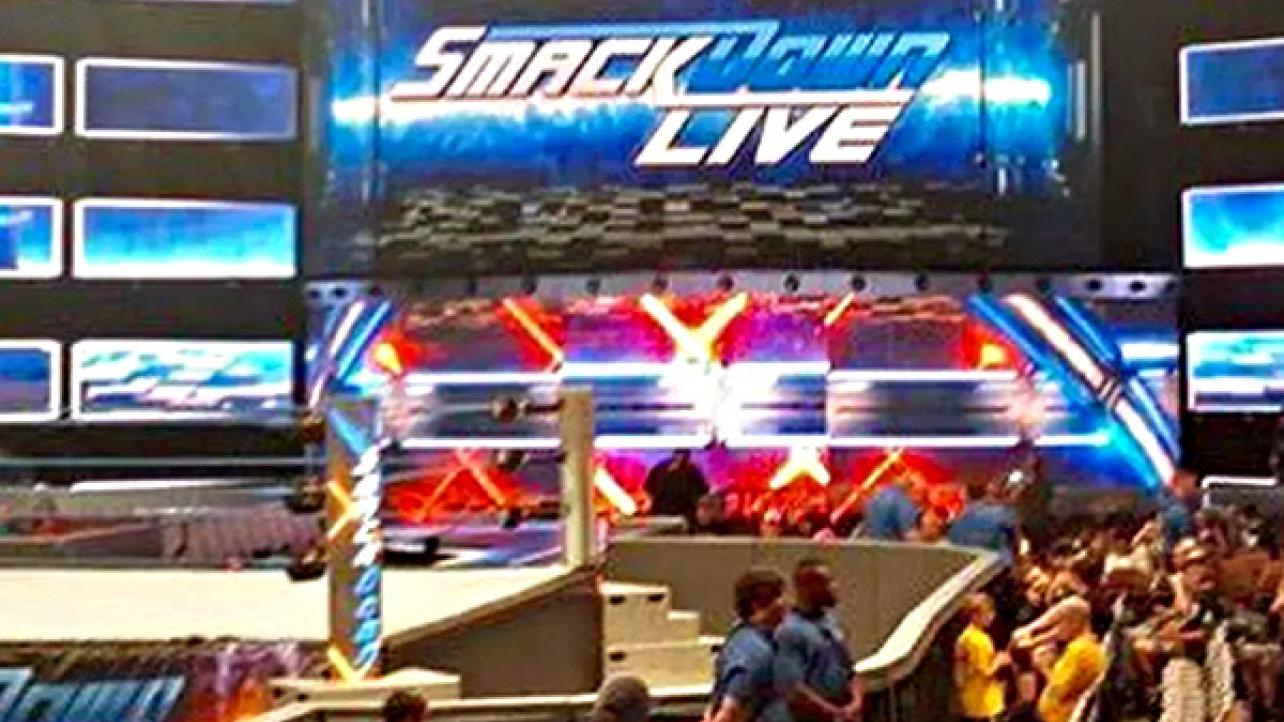 he October 9th edition of WWE SmackDown Live took place at the Bankers Life Fieldhouse in Indianapolis, IN.

– Randy Orton vs. The Big Show is announced right off the bat for later tonight.

– Charlotte vs. Becky Lynch (c): We kick off tonight’s show with a Women’s Championship match. If Becky gets disqualified, she loses the Title. Both women are hesitant to engage off the opening bell, but they finally lock up and trade holds on the mat. Becky connects with a couple of kicks and looks for the Disarm-Her, but Charlotte escapes. Charlotte takes out Becky’s knee, which gives Charlotte a moment to recover. Becky takes Charlotte back down to the mat and works over her left shoulder. Charlotte comes back and dumps Becky outside, then follows up with a suicide dive to the ringside floor. Back in the ring, Becky takes back control with a t-bone suplex for a two count. Charlotte mounts a comeback with a suplex of her own, and then she goes up top for a shot but misses. Becky hits an ezniguri and Charlotte is down. Becky climbs the turnbuckle, but Charlotte gets up and drops her on the top rope. Becky latches on to Charlotte’s arm from the top rope, and they tumble down to the ring as Becky looks for the Disarm-her. Charlotte blocks the hold and picks up Becky for a sit-down powerbomb for a two count. Becky gets frustrated and rolls out to ringside to grab her Women’s title. It looks like Becky is going to walk away and try to get counted out. The ref’s distraction leads to a cheap shot on Charlotte. The ref threatens to DQ Becky, but Charlotte then rolls up Becky from behind out of nowhere for a two count. Charlotte sends Becky outside and looks for a big suicide dive to the outside but misses. Becky wastes some time, and Charlotte comes back with a t-bone suplex on Becky on the ringside floor. Back in the ring, Charlotte hits the Natural Selection on Becky, but then Becky immediately rolls out to ringside so Charlotte can’t pin. Charlotte rolls outside, and they brawl back and forth until the ref counts them both out.

– Charlotte and Becky continue to brawl up the ramp until Charlotte spears Becky through some screens on the stage. Referees and trainers come out to check on them as both women are down. Charlotte appears to be bleeding from her arm or wrist.

– Jeff Hardy is shown backstage putting his facepaint on. He’s in a singles match with Samoa Joe next.

– Before the match, we go to video packages looking at the careers of Jeff Hardy and Samoa Joe.

– Samoa Joe vs. Jeff Hardy: Joe and Jeff trade strikes in the opening moments until Joe headbutts Hardy down to the mat. Joe’s left leg is wrapped up as he’s selling an injury. Joe hits a senton for a two count, and then he applies a shoulder lock on Hardy. Hardy fights up to his feet and drops Joe with a forearm to the face. Hardy follows up with the inverted atomic drop, and then a shot to Joe’s bad knee. Jeff focuses in on Joe’s bad knee now and keeps him grounded. Joe rocks Hardy with a shot to the face from his knees, but as Joe goes to stand up, he falls back down and sells his knee. Joe is unable to stand up on his injured knee, so the ref calls the match because Joe can no longer compete.

– Joe does not look happy as he sells his knee injury and Jeff celebrates.

– We go to a video package looking at Randy Orton’s career and his recent actions.

– A reunion of Evolution is announced for SmackDown 1000 next week, featuring Batista, Ric Flair, Triple H and Randy Orton.

– The Miz comes out to the ring next as he gets ready for the latest edition of Miz TV. We go to commercial break.

– Back from the break, we see a replay of Charlotte and Becky going through the tron earlier. SmackDown GM Paige has an announcement to make regarding the Charlotte/Becky feud — she is booking them in a Last Woman Standing match for the Women’s Title at WWE Evolution.

– Back to the arena, the ring is now set up for Miz TV, and The Miz is on the mic. The Miz introduces AJ Styles first. Miz asks AJ how the family is, and AJ doesn’t seem happy with Miz. Daniel Bryan comes out next, and he enters the ring and shakes hands with AJ. The Miz is disgusted by their handshake, and says that isn’t what the people want to see. Bryan says maybe Miz would rather talk about the match they had against each other, but it wouldn’t take very long. Bryan insinuates that Miz wasn’t a worthy opponent for him, but AJ Styles is the most worthy opponent because he’s defended the WWE Title for over 300 days. Bryan says he’s glad AJ thinks he can beat him, because deep down Bryan knows he can beat AJ. AJ says Bryan hasn’t faced anyone phenomenal since coming back from his injury. Bryan calls Miz a two-minute-man, in reference to their short match Bryan won. Bryan says his dream wasn’t to come back and fight this jerk Miz, his dream was to win the WWE World Championship. AJ and Miz then change subjects and talk about how good it feels to punch The Miz in the face. Miz says Bryan stole his opportunity, because his shoulder was up during the pin and the ref was out of position. Miz says AJ is just another version of Daniel Bryan except with a southern accent. Miz says the reason why the WWE Title doesn’t headline pay-per-views anymore is because of AJ. Miz says no matter which one of them wins at Crown Jewel, Miz wants them next. Miz says AJ should wipe the smile off his face, because he has to face Shelton Benjamin tonight in a non-Title match.

– AJ Styles vs. Shelton Benjamin: Miz and Bryan are on commentary for this one. The opening bell sounds and Shelton starts of strong. Benjamin hits a big back body drop on AJ, and then pummels on him in the corner. AJ fires back with chops and strikes. Shelton misses a shot and AJ capitalizes with the Pele kick. They roll out to ringside and Shelton slams AJ in to the fan barricade. Back in the ring, AJ fights back with a clothesline and a running forearm shot. Shelton misses a shot near the apron, and AJ fires back with the Phenomenal Forearm for the three count after a short but competitive match.

– Bryan claps for AJ after the match as Styles poses in the ring for the fans.

– The broadcast team introduces a video package looking at The Big Show’s highlights from recent years. He faces Orton tonight in a World Cup qualifying match.

– Up next: Aiden English has more video footage on Lana from Milwaukee.

– Aiden English comes out to the ring wearing a Happy Aiden Day shirt. Aiden refers to his video as “One Night in Milwuakee.” Aiden directs us to the jumbotron for the “direct’s cut” of his video. The full video shows Lana saying “I want you….. to know how much you mean to Rusev.” She goes on to praise Aiden for everything he has done for his career. Aiden thanks Lana for her kind words, and says they both mean the world to him. It looks like Aiden goes in to kiss Lana, and then the video pauses. Aiden says before the plays the video, he wants Rusev to come out. Rusev comes out, and he’s got a mic. Aiden says we all know what happens next in the video, but he tells Rusev he has an offer for him. Aiden says he won’t play the video and he’ll delete it, if Rusev kicks Lana to the curb and brings Aiden back. Lana comes out to join Rusev. Rusev tells Aiden to play the full tape, but Aiden doesn’t want to. Lana now says if Aiden won’t show it, Lana will. Rusev tells Aiden he got hacked, because his password was “iheartrusev.” Lana shows the full video, which shows Lana turning down Aiden’s advances. The footage shows Lana leaving the room as Aiden tries to apologize. Back in the ring, Aiden looks stunned. Aiden says fine, you got him, but he tells Lana the offer is still on the table for when she gets sick of Rusev Days. Rusev hits the ring now and beats down Aiden. Rusev looks for a big boot, but Aiden dodges it and rolls out of the ring. Aiden retreats up the ramp as Rusev and Lana hug in the ring.

– Rey Mysterio is announced for next week’s SmackDown 1000, and we go to a video package looking at his career in WWE.

– Rey Mysterio vs. Shinsuke Nakamura in a World Cup qualifying match is then announced for next week’s show.

– The Big Show is shown backstage heading towards the Gorilla position.

– Randy Orton vs. The Big Show: The Big Show knocks Orton out of the ring early on, and Orton circles the ring appearing to consider his game plan. Back in the ring, Orton fights off Show and hits a DDT for a one count. Orton starts targeting Big Show’s knee now, and then stomps on his hands before applying a chin lock. Big Show drops Orton back and then lays into him with punches. They run the ropes and Big Show hits a running shoulder tackle. Show calls for the chokeslam, but Orton rolls out to ringside. Big Show rolls out and takes Orton back in the ring, and Orton connects with a dropkick on the apron. Orton follows up with a draping DDT from the middle rope for a two count. Big Show comes back with a spear, and then he calls for the chokeslam again, but Orton once again rolls out to ringside. Big Show grabs Orton by the skull and yanks him back onto the apron and in the ring. Big Show hits the chokeslam, but Orton gets the shoulder up. Big Show looks for the knockout punch, but Orton rolls out to the apron, and then pokes Big Show in the eye when the ref can’t see. Orton follows up with the RKO for the three count.

– In the replays we see the ref’s view was obstructed by Big Show’s back while Orton thumbed his eye. Orton celebrates in the ring as we go to a graphic showing the current qualifiers for the World Cup: John Cena, Kurt Angle, Jeff Hardy and Randy Orton. SmackDown goes off the air as Orton poses on the turnbuckle.