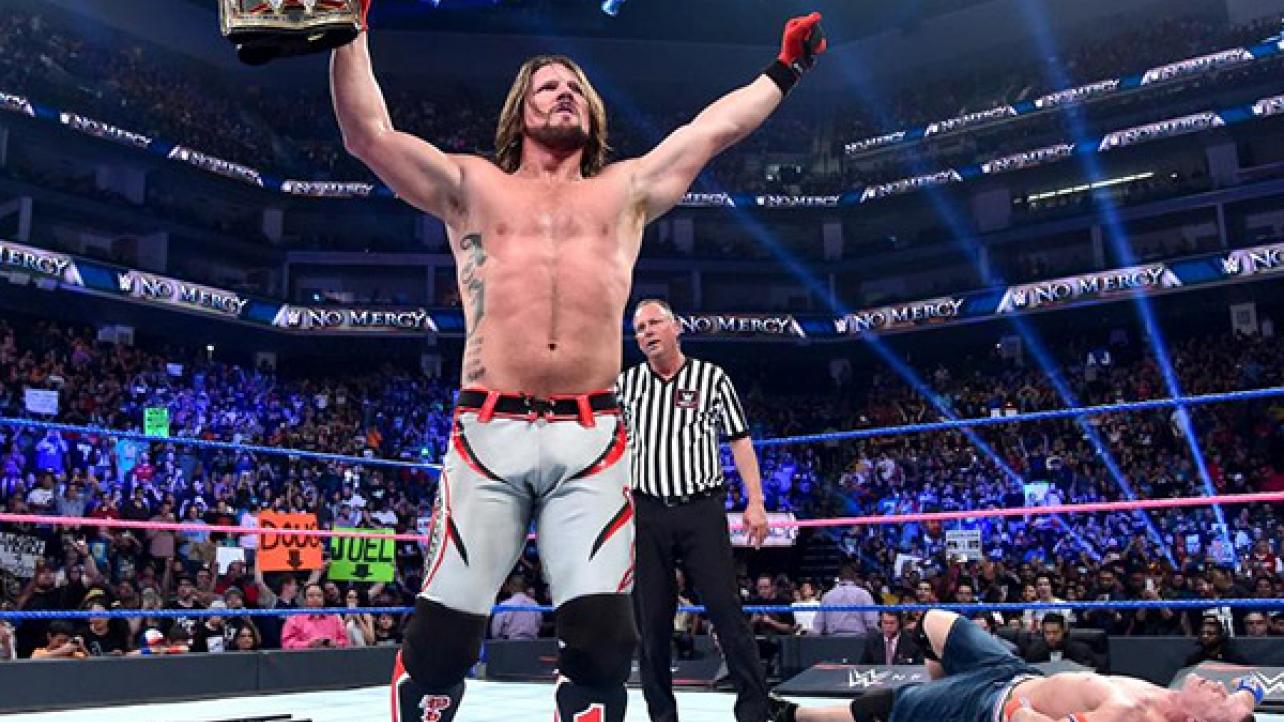 The October 11, 2016 edition of WWE SmackDown aired live on the USA Network from the SAP Center in San Jose, CA.

– Dolph Ziggler comes out to the ring to open up the show and talk about his Intercontinental Title victory last night at No Mercy. Ziggler holds up his IC Title belt and tells the crowd “We did it,” but then is interrupted by The Miz and Maryse. The Miz says he needs to take a moment to mourn the death of the Intercontinental Championship. Ziggler gets in Miz’s face, then The Miz brings out The Spirit Squad, and we have a match.

– Dolph Zigger def. The Spirit Squad: The Miz is on commentary for this handicap match. Ziggler starts off with some kicks on Kenny and clotheslines him to the outside. The Miz distracts Ziggler, allowing Kenny to get some offense in on the IC Champion. Ziggler comes back with a double DDT on both members of the Squad, then a Stinger splash on Kenny. Ziggler gets double teamed and hit with a flying clothesline for a two count. Kenny goes for a powerbomb on Ziggler, but Ziggler gets out and hits a superkick for the win. The Miz immediately attacks Ziggler after the bell and hits the Skull Crushing Finale. The Spirit Squad goes to continue beating down Ziggler, but Heath Slater and Rhino make the save and chase off the heels.

– Naomi def. Carmella: We see footage from earlier today of Carmella attacking Nikki Bella in the back. Carmella attacks Naomi before the bell and the referee separates them. The bell rings and Carmella controls the opening moments of the match. Alexa Bliss is shown in the back watching on a monitor. Naomi comes back with a series of kicks and flying cross body off the top for a two count. Carmella dodges and splash in the corner and drops Naomi. Nikki Bella comes out to ringside and distracts Carmella, allowing Naomi to roll her up from behind for the win.

– Alexa Bliss cuts a promo in the back saying she could beat Naomi any day of the week. Daniel Bryan walks in and gives Alexa a match against Naomi next Tuesday on SmackDown.

– Jimmy Uso def. Chad Gable: Gable attacks Jimmy Uso aggressively off the bell, and works the left arm of Uso. Gable hits a twisting flying clothesline off the middle rope then a t-bone suplex. Gable follows up with a armbar on Uso, but Uso gets out and pins Gable. Jey assists the pin from the outside, and Jimmy gets the win.

– “The face that runs the place” AJ Styles is out to the ring to kick off the second hour of SmackDown. AJ cuts a heel promo on the crowd and talks about beating both Dean Ambrose and John Cena in the same night. Styles says he’s going to defend his title right away, and goes to introduce his opponent, but Dean Ambrose interrupts. AJ says he wasn’t talking about Ambrose and tells him to get lost. Ambrose cuts a promo on Styles and says he’s not leaving the ring. Styles tells his opponent to come on out anyways, and it’s James Ellsworth, the jobber from a few weeks back. Styles tells Ellsworth that SmackDown is the land of opportunity, and Ellsworth is getting a shot at the champion tonight, “in a non-title match of course.” Ambrose says he kind of wants to see this, and goes to sit on commentary. Styles says Ambrose isn’t allowed to distract Ellsworth from the commentary table, and tells him to go backstage. Daniel Bryan comes out next and says this match will happen now, and Dean Ambrose will be the special guest referee.

– James Ellsworth def. AJ Styles: Ambrose checks the competitors’ boots before allowing them to start. AJ completely controls the opening minutes of the match. After getting distracted arguing with Ambrose, AJ gets caught with a right hand from Ellsworth. AJ gets distracted by Ambrose again, allowing Ellsworth to roll him up from behind. AJ comes back with a clothesline and a suplex. AJ hits a backbreaker then puts Ellsworth in the Calf Crusher. Ellsworth taps out, but Ambrose is distracted by his cell phone and can’t make the call. AJ throws Ellsworth outside and beats him down around ringside. Ambrose starts counting him out quickly, so AJ takes things back in the ring. AJ throws Ellsworth back outside, but Ambrose throws him in. AJ hits the Styles Clash on Ellsworth and pins him, but Ambrose stops his count at two. AJ gets up and Ambrose hits the Dirty Deeds on AJ. Ambrose puts Ellsworth ontop of AJ then starts counting, but AJ gets his shoulder up. AJ hits another Dirty Deeds on AJ, puts Ellsworth on top of AJ again and this time counts faster to three. James Ellsworth now has a win over AJ Styles.

– Randy Orton talks with Kane in the back about their tag match against The Wyatt Family tonight. Kane tells Orton he has issues.

– AJ Styles chews out Daniel Bryan and Shane McMahon in the back about what happened in the ring. McMahon tells AJ not to be angry at Daniel Bryan or Dean Ambrose, and AJ has officialy lost to James Ellsworth. AJ says he’s going to take things into his own hands.

– Bray Wyatt & Luke Harper def. Randy Orton & Kane: Wyatt and Harper cut a promo on Orton before the match. After several minutes of back-and-forth action, Orton starts controlling the match against Harper. Orton hits a superplex off the top on Harper, then Kane tags in and continues the offense on Harper. Harper ducks a clothesline from Kane and Wyatt pulls Kane to the outside and beats him down. Wyatt throws Kane back in the ring and hits a senton splash. Harper tags back in and keeps Kane grounded. Kane drops Harper with a DDT then Orton and Wyatt get the hot tags. Orton lays out Wyatt with clotheslines then hits a spinning powerslam. Orton and Wyatt start brawling around ringside and Orton throws Bray into the ring steps. Back in the ring, Orton ducks a clothesline and hits his patented DDT on Wyatt off the middle rope. Orton turns his attention to Luke Harper but Kane stops him from entering the ring. The referee chases off Kane, then Harper runs in and distracts Orton. Wyatt drops Orton from behind, but misses the senton bomb. Orton and Wyatt are down when the lights go out. When the lights come back on, Kane is gone and Harper is standing in his place on the apron. Orton turns around into a Sister Abigail from Wyatt and Wyatt scores the pinfall victory.