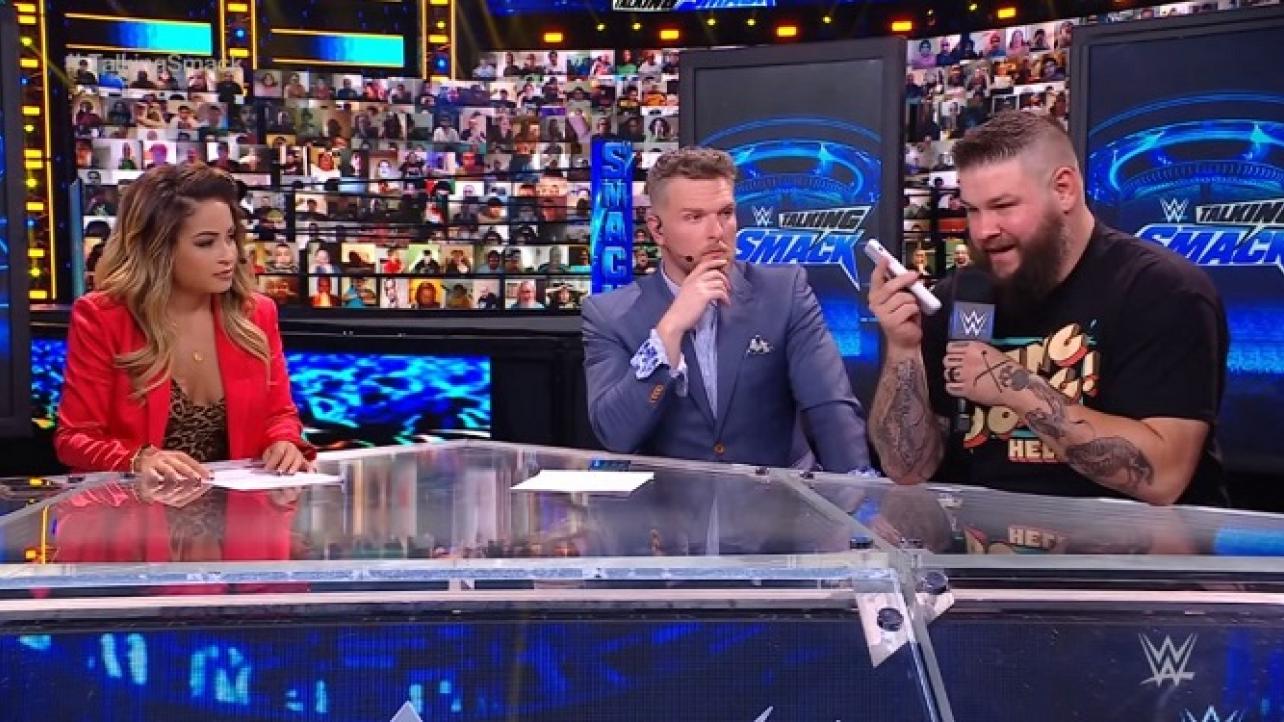 After last nights edition of Smackdown, WWE taped their latest episode of Talking Smack. The show featured the returning Zelina Vega, an appearance from Kevin Owens, as well as a visit from Bayley.

Kayla Braxton welcomes everyone to the show, and reminds the viewers that we’re three weeks away from Money In The Bank. Kayla is joined by Pat McAfee again, who is subbing in for Paul Heyman. McAfee says he “sets his life schedule around this show, because this is the best show on Peacock.” Kayla talks about the upcoming return to the road, and McAfee gives a bit of credit to the “spectacular ThunderDome.” Kayla and Pat cover a few highlights from last nights Smackdown, until Kayla sends the show to an ad break.

On the other side of the break, Bayley joins the host’s. Kayla lists off all of Bayley’s accolades, and Bayley thanks her for that. Pat says “ding dong hello to you,” and Kayla talks about the upcoming I quit match. Bayley responds, and tells the hosts “it’s ridiculous to think that Bianca could make me say I quit. She is an idiot for choosing this match. I’m a genius for getting in her head, and Bianca doesn’t realize I’m 10,000 steps ahead of her. I’ve been getting in her head since like 1902, and she doesn’t even know it!” Pat points out that Bianca believes she is the one in Bayley’s head, and wonders if Bayley possibly envy’s Bianca. Bayley tells Pat “she’s at the top of her game, but it’s not my fault Bianca became freaking womens champion. I should have said I quit the night she won the title, because it makes me sick, the site of her with that title. If this I quit match is the way she wants to go, I’m going to make her eat her words.” Pat says the upcoming match could get ugly, and that I quit is a powerful statement. Bayley explains “I would rather have a fair go at it, and see who is number one once and for all. She cheated once, and used a weapon to pin me at Hell In A Cell…” Bayley continues, “So this match is intimidating for me. Imagine how Bianca feels going into this match. I’ve been ready for everything since day one, and and I’m ready for Bianca. I don’t care what she thinks, or the title she holds, because it’s coming back to me. My dad lives in Dallas, I can’t wait to win the title and give him a hug.” Kayla thanks Bayley for her time, and mentions that Zelina Vega is next.

When Talking Smack returns, Zelina Vega makes her return to the show. Zelina teases Kayla about being back, and points out her own “excellent” hair. Vega says “concentrate on me, I’m Money In The Bank.” Kayla asks how Zelina made it into the match, and Vega explains “I don’t have to qualify, I’m just me.” Pat and Kayla show Zelina a few of her own highlights from Smackdown, and Vega scoffs at her loss, saying “she caught me off guard. It’s fine, I’m from queens, I’ll take those slaps all day. But she had to grab the tights to beat me.” Pat wonders if Liv impressed Zelina, and Vega says “no. People have thier text it’s, and do what they do, but that’s fine.. I’m actually in Money In The Bank.” Kayla wonders who will offer up the most competition for Zelina in the ladde match, and Zelina says no one is. Vega continues “ I have unfinished business with Bianca. I can take them all. That’s why I’m back.” Kayla wishes Zelina good luck, and Zelina tells her “I don’t need it.”

The most recent qualifier for the men’s Money In The Bank match joins the host’s, and he’s still showing the affects from his Last Man Standing bout. Kevin wonders where Heyman is, and Pat tells him “that’s a great question.” Kevin calls Heyman, and Pat asks about Jimmy Uso. Kevin says “I had hopes Jimmy wouldn’t follow in his brothers dumbass footsteps, and be one of Roman’s bitches.” Kevin struggles to contact Heyman, and Kayla tells him to “*67 it.” Heyman finally answers, and Owens tells him “don’t hang up, just listen. A few months ago I came on Talking Smack, and I told you I’m going after the Money In The Bank contract, and last night I qualified for the match. I need you to know I’m going to win the contract, and I’m one step closer. Make sure Roman Reigns knows when I get the contract I’m coming for him, and there’s not a damn thing he can go about it.” Heyman says “I’m sorry sir you have the wrong number,” and hangs up. Kevin storms off, and Pat wonders if Owens is mad at him, as the show fades to black.