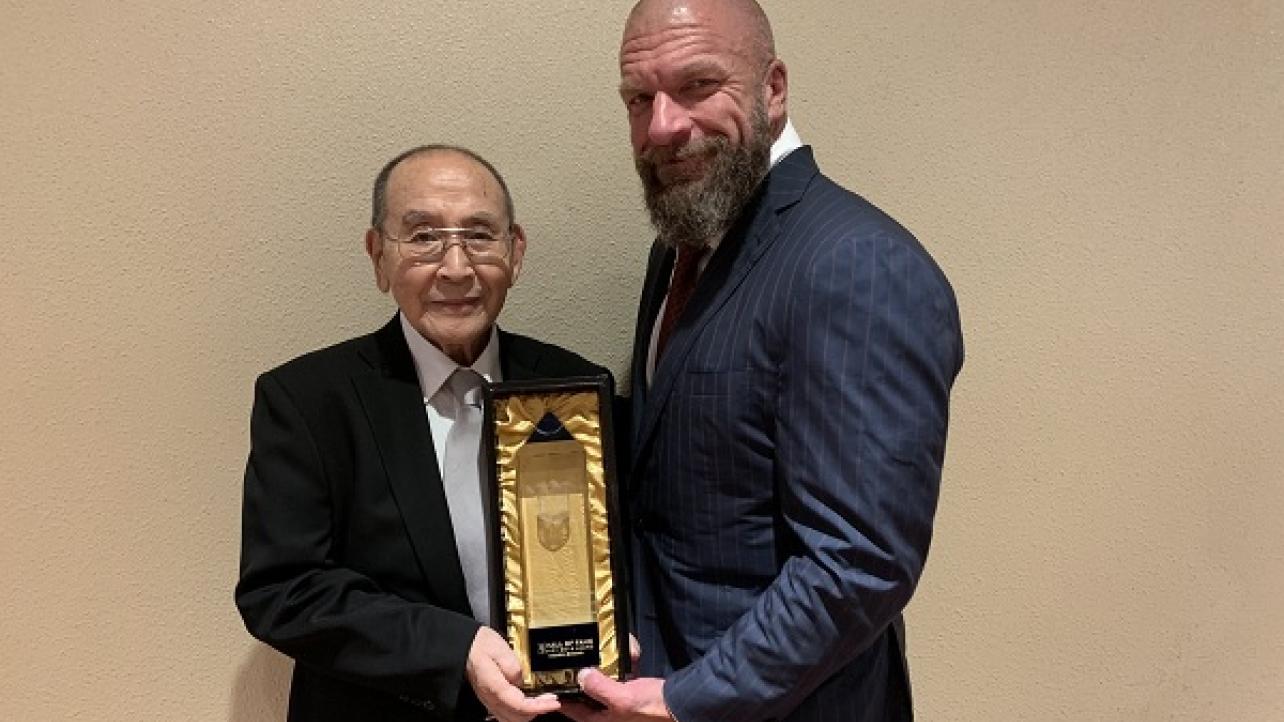 WWE ran the Ryogoku Kokugikan (Sumo Hall) in Tokyo, Japan for a non-televised live event this week, and it was quite the newsworthy event.

During the event, as WWE advertised, The Club reunited. A.J. Styles teamed with Luke Gallows and Karl Anderson, as well as special one-night member Triple H, to take on the foursome of Bobby Lashley, Baron Corbin, Samoa Joe and Drew McIntyre. The Club and “The Game” would go on to pick up the win before celebrating and posing for the crowd, including doing their “Too Sweet” hand gesture together.

Additionally, Hisashi Shinma was inducted into the Legacy Wing of the WWE Hall Of Fame.

Featured below, courtesy of Wrestling with Demons & Cageside Seats, are complete results from the show:

* Hisashi Shinma (WWF kayfabe President in the 70s and 80s) was inducted into the Legacy Wing of the WWE Hall of Fame.
* Ricochet def. Cesaro via pinfall to retain the WWE United States championship
* Braun Strowman pinned Bobby Roode, then Roode got put through a table he set-up to use in a post-match assault of Strowman
* Asuka & Kairi Sane def. The IIconics to earn a WWE Women’s Tag Team title shot
* Triple H & The Club def. Lashley, Corbin, McIntyre & Joe
* The Revival def. Hawkins & Ryder via pinfall with Shatter Machine to retain their Raw Tag Team championship, then Gallows & Anderson attacked the champs.
* Becky Lynch def. Alexa Bliss via submission with Dis-Arm-Her to retain her Raw Women’s championship
* Seth Rollins def. Shinsuke Nakamura to retain the WWE Universal championship

From Wrestling with Demons:

* Hisashi Shinma was inducted into the WWE Hall of Fame Legacy Wing. He was the figurehead WWF President from the late 1970s to early 1980s. He was involved in the controversial overturning of Bob Backlund winning the WWF Title back against Antonio Inoki in Tokyo, Japan on Dec. 6, 1979 after Tiger Jeet Singh attacked Inoki outside the ring before the finish. You can watch that match here: https://youtu.be/s6T5SzjFLqY
* WWE U.S. Champion Ricochet pinned Cesaro.
* Braun Strowman pinned Bobby Roode after a powerslam. Roode attacked Strowman after and set up a table in the ring but of course Strowman powerslammed him through it.
* Asuka and Kairi Sane beat WWE Women’s Tag Team Champions Peyton Royce and Billie Kay when Sane pinned Royce after the insane elbow as Asuka knocked Kay off of the ring with a hip attack. This was the exact same finish as the show in Singapore yesterday. Asuka and Sane earned a future tag titles shot with this win.
* Triple H, AJ Styles, Luke Gallows, and Karl Anderson beat Baron Corbin, Samoa Joe, Drew McIntyre, and Bobby Lashley when Triple H pinned Corbin after a pedigree.
–Intermission–
* Raw Tag Champions The Revival beat Zack Ryder and Curt Hawkins when Hawkins was pinned after the Shatter Machine. Gallows and Anderson came out and challenged The Revival for tomorrow’s show back in Tokyo.
* WWE Raw Women’s Champion Becky Lynch beat Alexa Bliss with the Disarm Her submission.
* WWE Universal Champion Seth Rollins pinned Shinsuke Nakamura after the Curb Stomp.
Thanks to Tomi Yamada for the above results.

Check out videos and photos below from the WWE Tokyo event, including Triple H teaming and celebrating post-match with the reunited A.J. Styles, Karl Anderson and Luke Gallows — The Club, as well as the Legacy Wing WWE Hall Of Fame induction of Hisashi Shinma.

An amazing night in #WWETokyo. A city I’ve performed in countless times with an incredible roster of @WWE Superstars. An honor to give Mr. Shinma his #WWEHOF Legacy Award and team with The Club.
…and if this was one of my last times to perform in Tokyo… it was #TooSweet. pic.twitter.com/jED0yD5BlB