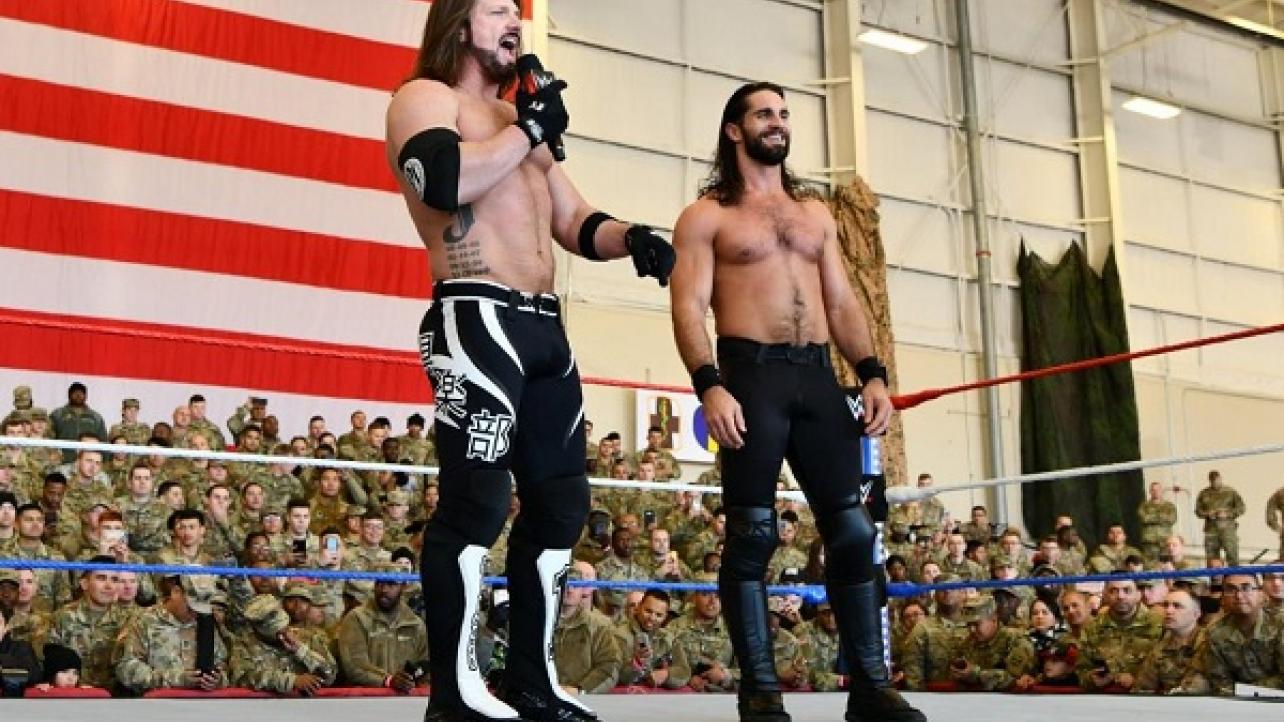 WWE Tribute To The Troops 2018 Results

As noted, this year’s WWE Tribute To The Troops 2018 special aired on the USA Network on Thursday evening. Featured below, courtesy of F4WOnline.com, are complete results from the show.

WWE TRIBUTE TO THE TROOPS 2018 RESULTS

The show began with a singing of the national anthem in the building while clips of military action were shown. Michael Cole talked about this show being from Fort Hood, Texas and Tribute to the Troops being the most important show WWE does all year.

JBL returned to commentary to call the event with Cole and Byron Saxton.

The New Day came out in Santa gear and talked about all of the sacrifices made by the troops. New Day said the best way to celebrate the holidays is with some hot cocoa and their matches on a loop on the WWE Network.

AJ Styles & Seth Rollins team up to face Daniel Bryan & Dean Ambrose in the main event. Ronda Rousey came out with a giant smile on her face for a triple threat tag match.

Rousey was ungodly over to start this off with Logan before Morgan came in and got thrown around. A double suplex got two on Morgan. Natalya then hit the slingshot atomic drop and a dropkick before Tamina came in and worked on her arm.

Jax worked Natalya over briefly before Tamina entered back in and got cradled. Logan came in and commentary talked about her Viking heritage a bit. Rousey tagged in and hit a rolling clothesline and then multiple judo throws. Rousey went for the armbar, but Morgan attacked her and then got thrown. Morgan and Logan tapped to a double armbar.

Rousey talked about what an honor it is to work in front of the troops. She thanked them for all of the sacrifices they make.

Jon Stewart was shown having fun with the troops, and Morgan Wallen sang “Whiskey Glasses.”

Elias entered to team with Finn Balor. Bobby Lashley was out with Lio Rush before Drew McIntyre sauntered down.

Lashley landed a corner spear and McIntyre hit a tilt-a-whirl backbreaker. Balor countered out of a move and tagged in Elias, with McIntyre tagging in Lashley. Lio Rush distracted Elias, Lashley hit a spinebuster, and Balor broke up the pin with a double stomp.

The Miz brought out Becky Lynch and Charlotte Flair for Miz TV. Miz talked about Lynch having to stand in Charlotte’s shadow, with Charlotte saying that queens cast shadows. Miz apologized to Lynch for overshadowing her in The Marine 6.

Lynch said that’s mighty big of Miz — and that’s the first time that’s been said of him. Mandy Rose and Sonya Deville interrupted for an impromptu tag match.

Charlotte started off with Deville and threw her to the floor. Charlotte acted like she was going to tag in Lynch but then denied it and dove onto the heels.

Deville worked Charlotte over a bit before tagging Rose in. Lynch tagged in and won with the Dis-Arm-Her.

An ad with The New Day treating troops to a meal at Denny’s was shown. Jon Stewart came down and talked about traveling on a C17 and it being a good way to transport dry goods or a tank — but a terrible way to move people. However, the C100 is much worse because it’s like a hollowed-out can.

The roster was shown having fun with the troops. Morgan Wallen performed “Up Down.”

Bryan and Ambrose came out, with Saxton knocking Bryan for how he’s acted lately.

Styles and Rollins sent Bryan and Ambrose packing when the heels tried to attack them before the match began. Rollins chopped away at Ambrose in the corner. Before an ad break, Ambrose laid Rollins out with a lariat.

Ambrose got an armbar and landed another lariat, but Rollins recovered and landed the buckle bomb. Bryan and Styles tagged in, with Bryan doing his run-up backflip and being met with a dropkick. Styles landed the ushigoroshi for two.

Bryan recovered and went for the corner dropkick, but Styles got the Calf Crusher before Ambrose broke that up. Ambrose threatened to break Styles’ neck, but Rollins hit a springboard lariat. Rollins hit a basement superkick to Bryan and suicide dives onto Ambrose. Styles landed the Phenomenal Forearm on Bryan for the win.

Styles and Rollins thanked the troops for their sacrifices. The roster came out to join them and slap hands with the troops.

WWE Tribute To The Troops 2018 Results