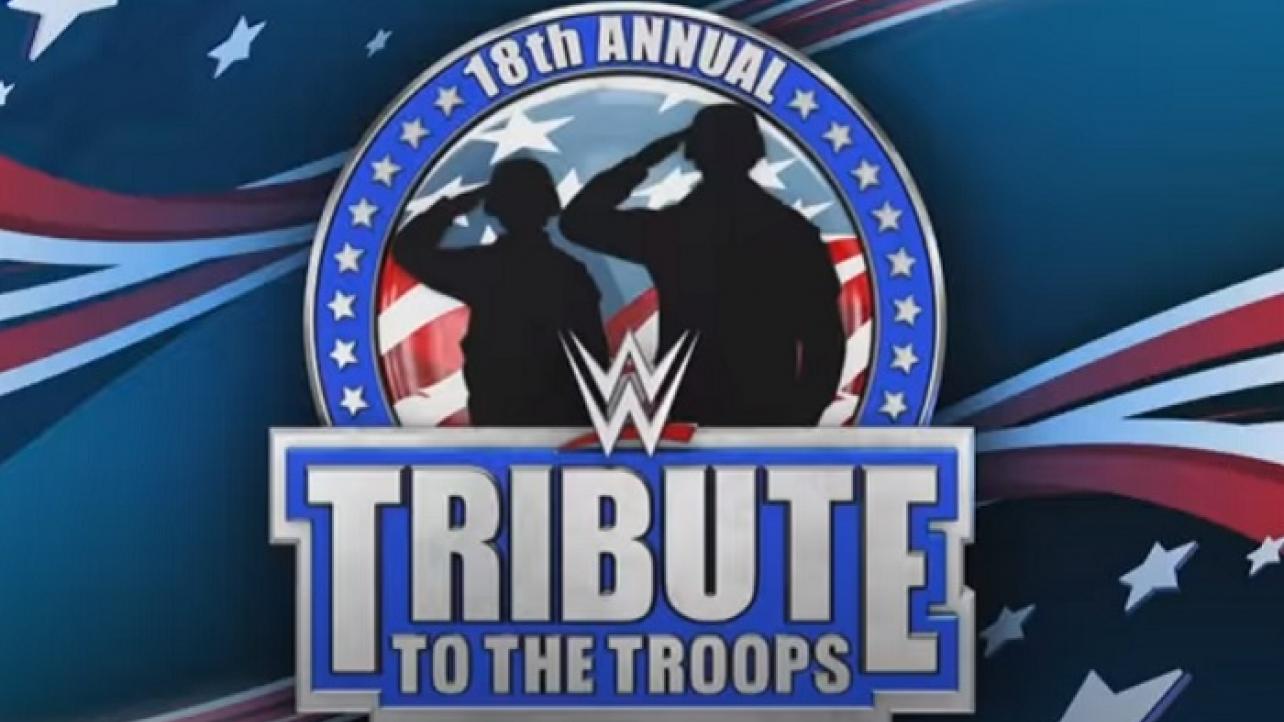 WWE aired their 18th annual Tribute to the Troops last night on FOX.

Featured below is a recap, including video highlights released by the company:

The following report comes courtesy of Richard Trionofo and Pwinsider.com.

We begin with a look back at the history of Tribute to the Troops.

We are in the ThunderDome and your announcers are Michael Cole, Byron Saxton, and John Layfield.

John says the biggest honor he has as a member of the WWE is Tribute to the Troops.

Bryan with a European uppercut and Irish whip. Bryan with a running drop kick into the corner and he gets a near fall. Roode with a back elbow and he tags Elias in. Elias sends Bryan into the turnbuckles and chops Bryan. Elias with punches and an Irish whip. Bryan flips over Elias in the corner and hits a flying clothesline. Bryan with kicks to the chest. Elias with an Irish whip but he runs into a knee. Bryan comes off the turnbuckles and is met with a knee.

Elias gets a near fall. Elias goes after Hardy and everyone starts to brawl. Rey with a seated splash off the apron to Zayn. Bryan with a suicide dive to Elias. Ford with a flip dive onto everyone and we go to commercial.

Bryan with a missile drop kick. Bryan makes the tag to Rey and Corbin tags in. Rey with a drop kick to the knee and a satellite head scissors. Rey punches Corbin in the corner and Corbin sends Rey to the apron. Rey with a shoulder and kick. Rey with a seated splash followed by a bulldog out of a wheelbarrow for a near fall. Corbin with a choke breaker to Rey. Zayn tags in and he goes for a belly-to-back suplex but Rey lands on his feet and he kicks Zayn. Dawkins tags in and clotheslines Zayn and hits a jumping back elbow. Dawkins with a spinning splash into the corner followed by a bulldog for a near fall.

Elias makes the save and Rey with a drop kick. Ziggler with a super kick to Rey. Roode with a spinebuster. Rey sends Roode into the ropes and hits a 619. Dawknins sends Corbin over the top rope and Zayn with a rollup for a near fall. Dawkins with a swinging neck breaker and he tags in Ford who hits the Seven Star Frog Splash.

We are back and the Fox NFL Sunday panel talk about the troops.

Lacey Evans and Jay Glazer are at Marine Corps Air Base Miramar.

We have a push up contest and Lacey joins in.

It is time for a performance from Hardy.

We take a look at the interaction between the WWE Superstars and the troops. This year, they were able to meet virtually.

We are back with Troy Aikman, Joe Buck, and Erin Andrews.

Bayley and Sasha start things off and they lock up. Sasha with a wrist lock and waist lock followed by a single leg take down. Sasha with a side head lock. Bianca tags in and Bayley with forearms to Bianca and Sasha. Bianca blocks a drop toe hold and picks up Bayley. Bayley with forearms and Natalya tags in. Natalya with a front face lock and Bianca with a side head lock and shoulder tackle. Bianca with a shoulder tackle and splash for a near fall. Bianca gets Natalya on her shoulders and she has words for Bayley. Bayley makes the save but Bianca with punches.

Sasha tags in and Bianca presses Sasha over her head and press slams her onto Natalya and Bayley as we go to commercial.

We are back and the Fox MLS panel talks about the troops.

Sasha blocks a kick and connects with a knee on Bayley. Bianca with a handspring moonsault onto Bayley. Natalya with an elbow but misses the discus clothesline. Natalya with a slingshot atomic drop and then Sasha trips Natalya and applies the Banks Statement. Natalya is rolled into the center of the ring and Natalya taps out.

We take a look at the appearance of Santa Claus in 2007.

We are back with comments from Drew Brees, Terry Crews, and Rob Gronkowski.

Morrison tries to pull Miz to the floor but Drew pulls Miz back and Morrison comes into the ring by accident. Miz with a thumb to the eye and Miz with a rollup using the ropes for a near fall. Drew punches Morrison to knock him off the apron. Drew escapes the Skull Crushing Finale and hits the Future Shock DDT. Drew with a Claymore for the three count.

REACTION: WWE TRIBUTE TO THE TROOPS 2020