Apparently Rhea Ripley is still in the United States after all.

In response to rumors that she was headed to Australia to sort out work visa issues and would be off of the weekly NXT On USA television shows indefinitely, the former NXT Women's Champion took to social media to clear things up.

This week, Ripley issued a post on her official Instagram story with a caption that read, "Yo wrestling world...still in America..."

This would appear to kill the previous rumors to the contrary that she is out of the country and will be off of WWE NXT TV as a result.

Additionally, in the bottom right corner of the post was a circular message that read, "There's a rumor going round."

Check out a screen shot of the aforementioned Rhea Ripley IG Story post below. 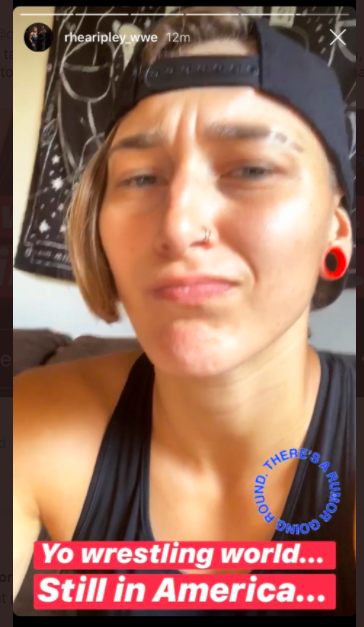 Former #WWENXT #WomensTitle holder #RheaRipley denies rumors that she has left #USA and will not be on #WWE's weekly #NXT TV show, #NXTonUSA, as a result ... (#Screenshot #PHOTO from her #Instagram #storytimethread at the #link below!)

Zelina Vega On Her WWE Status: "I Feel Like I'm Constantly Trying To Prove Myself"

AEW Dynamite Results (5/27): Post-Double Or Nothing Show From Jacksonville, FL.