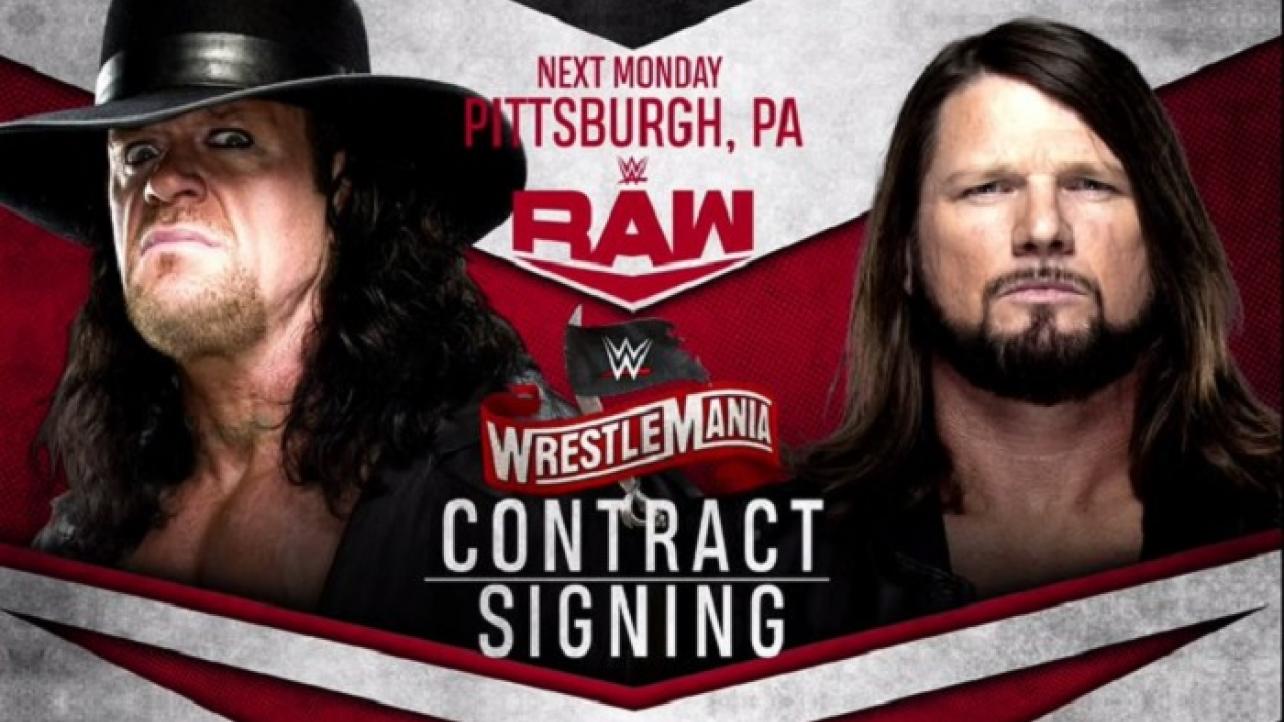 A WrestleMania 36 contract signing between The Undertaker and AJ Styles has been announced for next week’s episode of WWE Monday Night RAW.

As the “Road to WrestleMania 36” on April 5 continued during the post-Elimination Chamber 2020 episode of Monday Night RAW from the Capital One Arena in Washington, D.C. this week, a big step was made towards a highly-anticipated Undertaker vs. AJ Styles match being finalized for “The Grandest Stage of Them All.”

Styles came to the ring with fellow members of The O.C. — Luke Gallows and Karl Anderson — by his side. The trio stood tall in the ring as Styles would go on to challenge “The Dead Man” to a match at “The Show of Shows” on 4/5 at Raymond James Stadium in Tampa, Florida.

“The Phenomenal One” would go on to cut a promo on “The Phenom” of WWE, during which he repeatedly referred to Undertaker by his real name of Mark Callaway.

Styles claimed ‘Taker was “a broken down old man” and even alluded to him only wrestling still because of his wife, former fellow WWE performer Michelle McCool.

“Undertaker, your wife is going to run you into the ground,” Styles said during the promo on this week’s RAW. “And I’m gonna help her!”

Later in the promo, Styles promised he will take The Undertaker’s soul when the two meet inside the squared circle at WrestleMania 36 next month, as long as ‘Taker accepts his challenge.

Styles said that ‘Taker should go ahead and just accept the challenge because he has nothing left to lose, since he’s “already lost his mystique, pride and dignity.”

As WWE RAW continued, it was later confirmed by WWE that The Undertaker and AJ Styles will meet face-to-face in the ring next Monday night for their official WrestleMania 36 Contract Signing during a segment on RAW.

Check out videos and photos from the aforementioned segment featuring AJ Styles and The O.C. calling out The Undertaker for WrestleMania 36, as well as the trio mocking the legendary ring entrance of “The Dead Man” from Monday night’s RAW below.

Does @AJStylesOrg have the attention of #Undertaker?!

“Undertaker, your wife is going to run you into the ground, and I’m gonna help her.”

#Undertaker has @AJStylesOrg feelin’ a little upset… and The #PhenomenalOne wants THE PHENOM at #WrestleMania! #Raw pic.twitter.com/ALb6MdGYpB

NEXT MONDAY: The #Undertaker and @AJStylesOrg will be LIVE on #Raw to officially sign the contract for a match at #WrestleMania! pic.twitter.com/tmkqhZUsUy