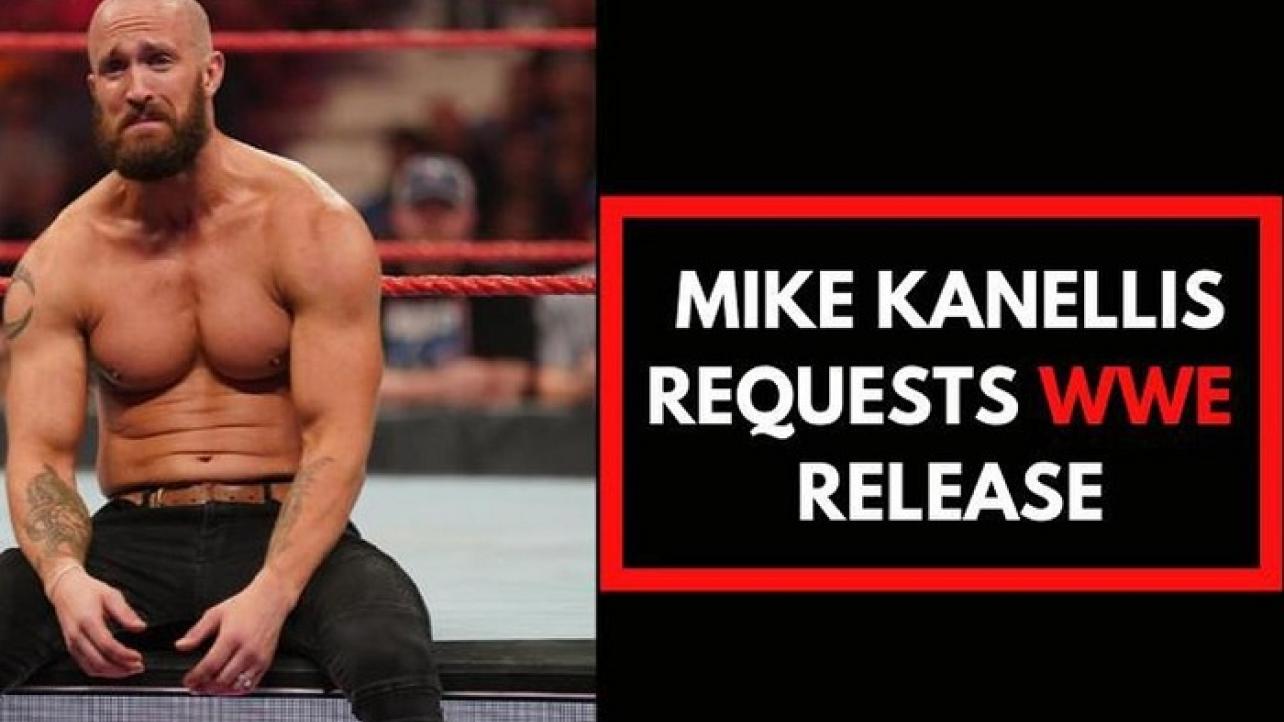 In a move that shouldn’t come as a major surprise to anyone, but definitely caught some off guard, Mike Kanellis has requested his release from World Wrestling Entertainment (WWE).

Kanellis, real name Mike Bennett, announced the news via his official Twitter page on Monday afternoon, although he has yet to reveal whether or not WWE has responded to his request.

Today I asked for my release from WWE. I want to thank everyone in the company who has helped me out and who I have shared a locker room with. I love you all. I’ve been with the company for almost 3 years and I am incredibly grateful for the opportunity. However it is time for me to move on. I am only 34 years old and feel I have way to much left in the tank.

Working 1 day a week is just not going to cut it for me. I came to WWE to work and that opportunity does not exist right now. I re-signed with the company back in June because I thought it was what was best for my family, and maybe from a financial standpoint it was. But I quickly realized that bringing my work frustrations and misery home with me, is not good for my family and I no longer want my daughter to constantly see me come home defeated, sad and angry. It’s not fair to her or my wife. Being a pro wrestler was and is my lifelong dream and I’m just not ready to give that up yet. I wasted 4 years of my life addicted to drugs and not caring, when I should have been having the best matches of my life. Now that I am clean, sober and motivated, I want to have those 30 minute matches. I want to travel the world and wrestle in front of UK crowds, German crowds, Japanese Crowds. I want to feel the love and excitement wrestling once gave me. I also want my daughter to be able to see me wrestle. I want her to see her daddy work for his money. I’ve never been ok with just collecting a paycheck and I can’t in good conscience tell my daughter she has to work her ass off to get ahead in life, then not do it myself. I don’t know what the future holds, but for the first time in a long time, I’m hopeful and excited. Thank you to everyone who has ever supported me and had my back. I love you.

According to Wrestling Observer Newsletter editor Dave Meltzer from F4WOnline.com, both Mike and Maria re-signed five-year contracts with WWE back in June.

Mike Kanellis last appeared on WWE television as recently as this past Friday, as he helped The Brian Kendrick defeat Akira Tozawa in their No Disqualification match on the returning episode of 205 Live from the T-Mobile Arena in Las Vegas, Nevada.

It’s interesting to note that Mike was not listed in the eligible draft pool of talent for the WWE Draft for either night.

We will keep you posted here at eWrestling.com as updates regarding the Mike Kanellis/WWE situation surface!